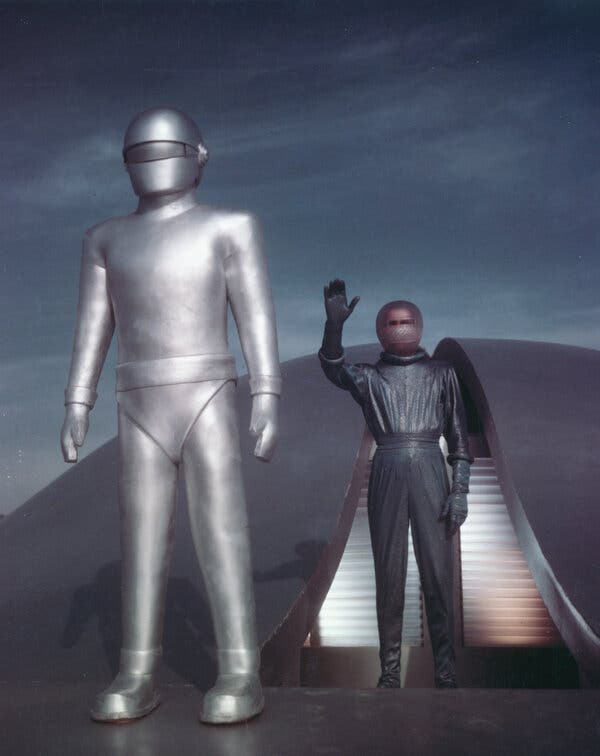 Last week, some of us awaited a report from US intelligence officials about UFOs appearing in the skies.  The report  generated  interest especially since US Navy pilots reported seeing an increased number of the unexplained objects.  Maureen Dowd in her column this morning reviews  the intelligence report and throws in a couple of digs.  Here is an excerpt.

“And yet not since Michael Rennie’s Klaatu and his all-powerful robot, Gort, landed their flying saucer on the Mall in the 1951 movie “The Day the Earth Stood Still” has the capital been so riveted by the possibility of aliens hovering.

Carbon-based life-forms are eagerly awaiting a report by intelligence officials about aerial phenomena lighting up the skies in recent years, mysterious objects witnessed and recorded by Navy pilots.

After reading The New York Times story on what the report will say, Luis Elizondo, who once ran the Pentagon’s secret program on U.F.O.s, tweeted, “If The New York Times reporting is accurate, the objects being witnessed by pilots around the world are far more advanced than any earthly technologies known to our intelligence services.”

Maybe we shouldn’t be surprised that a government that couldn’t get it together to prevent a primitive mob from attacking the seat of government on Jan. 6 can’t figure out a series of close encounters.

Could it be that we are not the center of the universe? The truth, if it’s out there, certainly isn’t in the report.

“The report determines that a vast majority of more than 120 incidents over the past two decades did not originate from any American military or other advanced U.S. government technology, the officials said,” according to The Times. “That determination would appear to eliminate the possibility that Navy pilots who reported seeing unexplained aircraft might have encountered programs the government meant to keep secret.”

Intelligence and military officials were worried that China or Russia could be engaging in hypersonic chicanery.

And since the U.S. has lied about stealth technology in the past, we can’t exclude the possibility that our government is messing with us.

The Navy pilots who saw the aerial vehicles were spooked, The Times said, reporting that “the objects had no visible engine or infrared exhaust plumes, but that they could reach 30,000 feet and hypersonic speeds.”

Lt. Ryan Graves, an F/A-18 Super Hornet pilot, told The Times, “These things would be out there all day” at such high speeds that “12 hours in the air is 11 hours longer than we’d expect.”

What has it come to that the only thing we can all agree on in Washington is something that used to be the definition of loony?

Unlike Jimmy Carter, who claimed to have seen a U.F.O. in Georgia in 1969, former Presidents Obama and Trump have no firsthand experience. However, they are open to the possibility.

“My entire politics is premised on the fact that we are these tiny organisms on this little speck floating in the middle of space,” the man christened Spock told Ezra Klein.

Trump recently told Dan Bongino, “I’m not such a believer, but some people are. So I don’t want to hurt their dreams or their fears.” Earth to Donald: After five years of stoking fear and hurting dreams, it’s a little late.

Some argue that, if it were aliens, they would have the technology to buzz our planes without being detected.

One Redditor, SentientHotdogWater, disagrees: “If we flew drones over a wildlife sanctuary to observe monkeys we wouldn’t identify ourselves to the monkeys, but at the same time we wouldn’t really be too concerned if the monkeys saw one of the drones.”

In sci-fi movies, aliens are often concerned with three things: they want to mate with us, eat us or warn us. In “Species” and “Dude, Where’s My Car?” the aliens take the form of femme fatales.

In the “Twilight Zone” classic “To Serve Man,” aliens professing peace present officials with a big book titled “To Serve Man.” But then it turns out, after they set up a flight to their planet, that “To Serve Man” is actually a cookbook.

In “The Day the Earth Stood Still,” the alien gives earthlings an ultimatum: Give up your bellicose ways or “Earth will be reduced to a burned-out cinder.”

We can only speculate what aliens want from us, if they’re getting closer and closer to landing.

They may want to learn why Joe Manchin and Kyrsten Sinema seem to have so much power they don’t deserve. Or maybe they’re alarmed to hear that Donald Trump is heading back to the Oval in August.

I checked with one of our true living experts, David Duchovny of “The X-Files,” to see how it will play out. “I know nothing ;),” he emailed back with a wink.

If the aliens are watching and haven’t exterminated us yet, perhaps they are willing to step in and lend a hand.

I say, aliens, show yourself. Beam down! Time to serve man!”