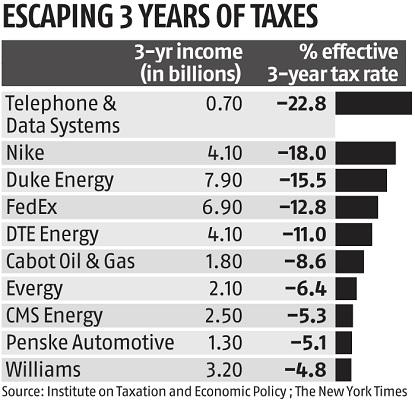 The New York Times editorial this morning, entitled Make Tax-Dodging Companies Pay for Biden’s Infrastructure Plan, calls attention to how corporate America evades paying their fair share of taxes by taking advantage of loopholes such as those that allow them to shift profits earned in the United States to other countries. This type of tax reform is long overdue but would be especially appropriate now that President Biden is developing plans to invest in American infrastructure.

The entire editorial is below.

American companies and companies that make money in the United States are not paying enough money in taxes. Even as profits have soared, tax payments have declined. Fifty-five of the nation’s largest corporations — including FedEx, Nike and the agribusiness giant Archer Daniels Midland — paid nothing in federal income taxes in 2020, despite collectively reporting more than $40 billion in profits, according to the Institute on Taxation and Economic Policy.

The federal government lets companies avoid taxes by shifting profits earned in the United States to countries with lower tax rates. Every year, American firms, especially in the technology and pharmaceutical sectors, brazenly pretend to earn billions of dollars in microstates like Barbados, Bermuda and the Cayman Islands, which are more than happy to play along. Companies and countries both profit, at the expense of the United States.

American policymakers have rewarded this naked legerdemain with rounds of tax cuts, most recently in 2017, partly justified as necessary to induce companies not to cheat. The tax cuts have also been sold as magic fertilizer that will cause the economy to grow faster.

This laissez-faire policy has crammed money into the pockets of wealthy shareholders while depriving the government of needed revenue. But it has failed to deliver its advertised benefits. Allowing corporations to keep a larger share of their profits has not catalyzed corporate investment, nor has it showered Americans with trickle-down prosperity.

There are few clearer examples of the failure of the ideology of reflexive market deference that has dominated economic policymaking in Washington over the last several decades.

In a welcome course correction, President Biden is proposing to increase corporate income taxation and to spend the money on infrastructure. His plan would raise the statutory tax rate on corporate income to 28 percent from 21 percent, still well below the pre-2017 level of 35 percent. The administration estimates it would raise $2.5 trillion over the next 15 years.

The American economy could use a healthy dose of tax-and-spend liberalism. As the Treasury secretary, Janet Yellen, recently and rightly noted, “By choosing to compete on taxes, we’ve neglected to compete on the skill of our workers and the strength of our infrastructure.”

However, collecting more money is not as simple as ratcheting up the corporate tax rate.

In 2017 multinational corporations stashed 40 percent of their profits, or more than $700 billion, in tax havens like Luxembourg and Bermuda, according to research by economists at the University of California, Berkeley, and the University of Copenhagen. Raising tax rates, in isolation, would encourage evasion. It would be like drawing water with a larger sieve.

The core of the Biden plan, therefore, is not the increase in the statutory rate. Rather, it’s a set of companion measures to tax the profits that American companies stash in other countries.

Under the plan, companies would be subject to a 21 percent tax on income reportedly earned in other countries, alongside the 28 percent tax on domestic profits. Companies would get credit for taxes paid to foreign governments; the United States would collect the rest. A company that reported $1 billion in earnings in a country with a 10 percent tax rate would pay $100 million in taxes in that country and an additional $110 million to the U.S. Treasury Department. This simple fix would sharply reduce the incentive to shift profits to low-tax countries.

Setting the tax rate on foreign profits at the same level as the rate on domestic profits would further reduce incentives for profit shifting. But among the developed democracies that make up the Organization for Economic Cooperation and Development, the average corporate tax rate is 23.5 percent. A higher tax rate on foreign profits could place some of the legitimate foreign activities of American firms at a competitive disadvantage.

The Biden administration also is pressing for an international agreement to establish a minimum corporate income tax rate, so foreign corporations could not continue to make use of tax havens. The benefits would extend beyond the United States. Developing nations are particularly reliant on corporate tax revenue. The International Monetary Fund estimates that profit shifting deprives them of $200 billion in annual revenue.

An international deal, however, is not a prerequisite for carrying out the balance of the Biden plan. The legitimate foreign business of American companies is mostly conducted in nations with relatively high corporate tax rates. And even without a deal, the United States could put pressure on tax havens.

The Biden plan would impose tax penalties on the American arms of foreign companies based in countries that maintain low rates. The Obama administration deployed a similar strategy in 2010 to crack down on tax evasion by wealthy individuals by penalizing foreign banks that did not give client information to the Internal Revenue Service.

Corporations and many economists caution that higher tax rates will discourage investment by increasing the return necessary for an investment to be profitable. They say workers will feel the pain of higher tax rates, too, in the form of slower wage growth.

But recent history belies such bleak predictions. After all, before the 2017 tax cuts, American corporations paid about 40 percent more in income taxes each year. A comparison with the rest of the developed world is also instructive. In the United States, the taxation of corporate profits amounted to just 0.96 percent of gross domestic product in 2018, compared with 3.14 percent in the average developed democracy, according to O.E.C.D. data.

It is also a mistake to assess economic policy solely on its contribution to overall economic growth. The distribution of prosperity matters, too; taxing corporations to pay for public services is a worthwhile trade-off. And there is good reason to think that the negative effect on corporate investment and on wages likely would remain relatively small.

The income tax is designed to protect investment. The government, for example, allows companies to deduct interest payments from taxable income. A company that borrows to build a factory pays taxes only on profits exceeding the cost of the loan. The money that gets taxed is mostly what economists call excess returns and what a Louisianian might call lagniappe — profits in excess of what is necessary to motivate investment.

The Biden administration is also proposing a final layer of reinforcement for the income tax: a requirement that companies with income exceeding $2 billion a year pay in taxes at least 15 percent of the income reported to investors. The average American multinational paid just 7.8 percent of its income in corporate income taxes in 2018, according to the congressional Joint Committee on Taxation, so imposing a higher minimum has obvious political appeal.

But companies paying less than 15 percent of income in taxes may be taking advantage of tax breaks that serve a legitimate public purpose, such as encouraging spending on research or investing in affordable housing developments. If the alternative minimum tax allows those breaks, it won’t raise much money. If it does not include those breaks, it will undermine those goals. In practice, it’s a choice between a meaningless gesture and a mistake.

Instead of using an alternative minimum tax to patch problems with the primary tax code, Congress can directly address the use of existing tax breaks. The necessary changes can and should be achieved under a single corporate income tax structure. Raise the statutory rate, crack down on the use of foreign tax havens and buy the nation something nice.