Nathan Grawe in his new book,  The Agile College (Johns Hopkins University Press), providess a series of enrollment projections through 2034.  His data (see below) are disaggregated between two- and four-year institutions, and the latter are further divided by U.S. News & World Report rankings (“elite” colleges are those among the top 50 colleges or universities; “national” colleges are ranked between 51 and 100; “regional” colleges are those ranked outside the top 100). The enrollment-demand projections are indexed to 2018.

As reported by The Chronicle of Higher Education, and based on Grawe’s data, we should expect a national decline of approximately 10 percent in the enrollment pools for two-year and regional four-year colleges. These losses are amplified in the Midwest and Northeast. Because fertility since the Great Recession has fallen short of the replacement rate throughout the country, even the South and West can anticipate a reversal of rising enrollments in the mid-2020s. Still, past college-going patterns suggest a gentler path for more-selective colleges. The rising number of parents with college degrees suggests increasing interest in four-year colleges in general and selective ones in particular — a trend that offsets the downdraft of fertility decline but intensifies the weakness in demand for less-selective colleges.

The recent “Knocking at the College Door” report by the Western Interstate Commission for Higher Education echoes the persistent and widespread challenges posed by demographic change, particularly in the Midwest and Northeast. We can also begin to take stock of how colleges are responding to these challenges. The commission’s president, Demarée Michelau, has noted that while the challenges are real, they represent “an opportunity [to] be thinking about our student populations differently and serving them better.” It’s not too late to alter the grim projections above, but colleges must confront demographic change head-on.”

These are sobering projections.  Higher education policymakers and administrators will need to take heed and plan accordingly. 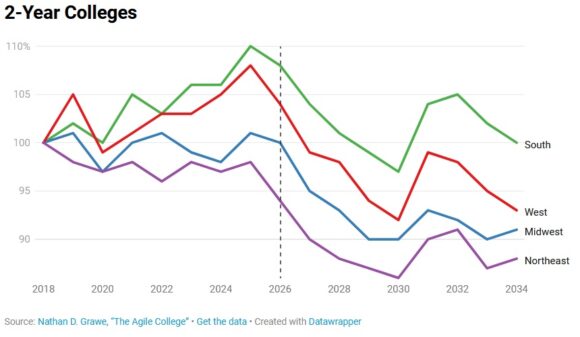 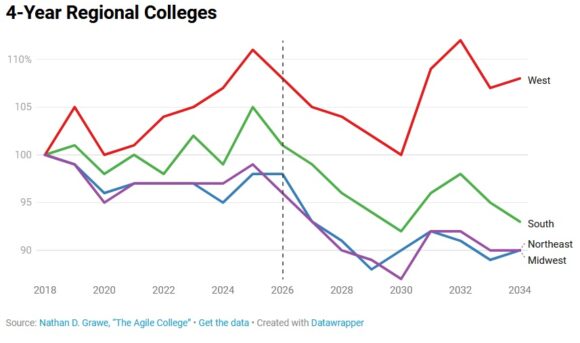 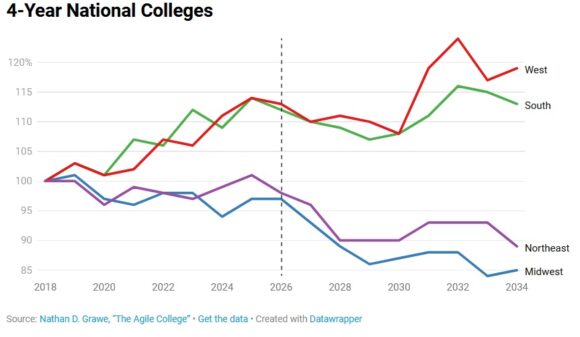 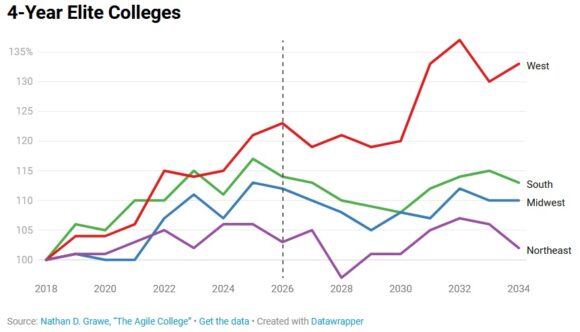