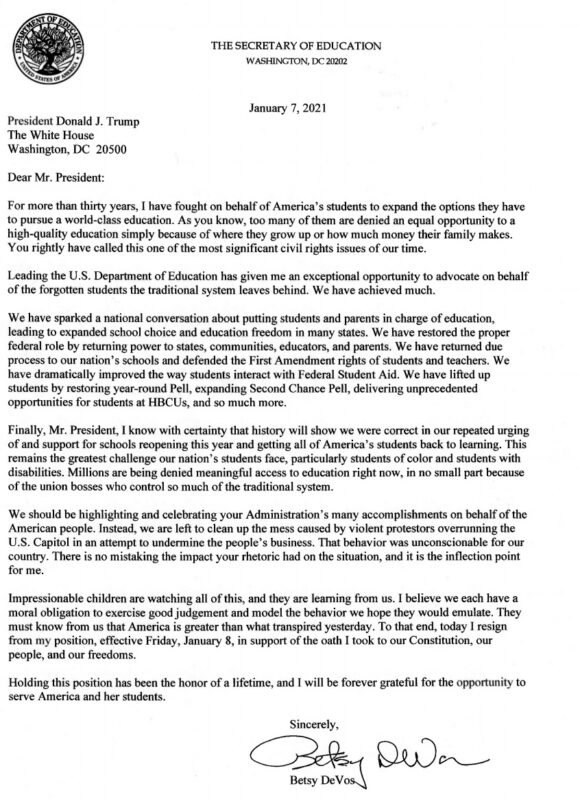 In her resignation letter (see above), DeVos called President Donald Trump’s recent rhetoric fanning the flames of his supporters an “inflection point” and laid blame directly at the president’s feet for sparking the unprecedented assault on the halls of Congress.

“We should be highlighting and celebrating your Administration’s many accomplishments on behalf of the American people,” DeVos wrote in her letter to the president. “Instead, we are left to clean up the mess caused by violent protestors overrunning the U.S. Capitol in an attempt to undermine the people’s business.”

“That behavior was unconscionable for our country,” she added. “There is no mistaking the impact your rhetoric had on the situation, and it is the inflection point for me.”

DeVos went on to say children were watching the footage from the Capitol and that she believed “we each have a moral obligation to exercise good judgment and model the behavior we hope they would emulate.”

“Holding this position has been the honor of a lifetime, and I will be forever grateful for the opportunity to serve America and her students,” she concluded.

DeVos was one of Trump’s longest-serving Cabinet secretaries after barely eking out a confirmation in February 2017.  After two Republican senators voted against her, Vice President Mike Pence had to provide an unprecedented tie-breaking vote to help her get the job.

Still, despite becoming one of the administration’s most universally loathed members, the billionairess weathered previous waves of resignations and firings, standing by Trump through impeachment and acting as a loyal foot soldier.

Her critics often painted her as a villain hellbent on privatizing public education. Announcing plans to “fire” her became popular tropes for Democrats on the presidential campaign trail.

Despite repeated efforts, DeVos failed to create a federal private school choice program and made little meaningful progress in helping to expand such efforts on a nationwide level. Even throughout the COVID-19 pandemic, DeVos advocating for sending federal dollars directly to families rather than to public schools. She also pushed for the immediate reopening of in-person classrooms while abdicating responsibility for some of the efforts that might help schools do so safely. In October, DeVos said it was not her department’s job to collect data on coronavirus infection rates in school, though education leaders had been asking for that.

Randi Weingarten, President of the American Federation of Teachers, who upon hearing of DeVos’ resignation, sent out a two-line sentence   “Good riddance!”   I would add that DeVos and the other White House appointees jumping ship are not showing any courage, they are simply trying to distance themselves from the stench of Trump’s legacy.  Sorry but you are too late.