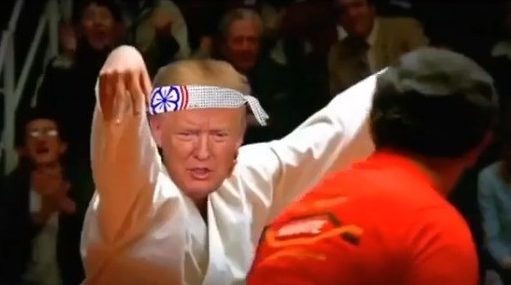 While regularly criticizing China for undercutting American business interests and ranting about the “Kung Flu” pandemic, President Donald Trump has maintained a bank account in The People’s Republic for years in hopes of pursuing business deals in the nation, The New York Times reported this morning.

The Times noted that Trump maintains just three foreign bank accounts — the one in China and two in Britain and Ireland that are largely used by the companies that operate his golf resorts in Scotland and Ireland. The account in China, which had not been previously reported, is controlled by Trump International Hotels Management and as such doesn’t appear on the president’s public financial disclosure paperwork.

The company paid $188,561 in taxes to China from 2013 to 2015, the Times added, although it reported only a few thousand dollars in income to the Internal Revenue Service (reporting overseas income is required by law).

Alan Garten, a lawyer for the Trump Organization, confirmed that Trump held a Chinese bank account and told the Times it was opened “with a Chinese bank having offices in the United States in order to pay the local taxes.” He said the Trump Organization had opened an office in China to explore hotel deals, but it had remained inactive since 2015 and the bank account had “never been used for any other purpose.”

The revelations would seem to undercut efforts by both Trump and top Republican lawmakers who have spent months trying to use similar information about Hunter Biden, Democratic presidential nominee Joe Biden’s son, to paint the former vice president and his family as too “soft” on China.

The GOP has long made false assertions about Hunter Biden’s foreign business dealings, including his work on the board of a Ukrainian energy company, in an effort to smear the Biden family and claim he “cashed in” on his father’s tenure in the Obama White House.

“He’s like a vacuum cleaner — he follows his father around collecting,” Trump said recently about Hunter Biden’s work abroad. “What a disgrace. It’s a crime family.”

There is no evidence that either Biden has engaged in wrongdoing.

The article is the latest in a series of New York Times reports based on copies of two decades worth of Trump’s tax returns, which the president has refused to release for the entirety of his first term in office. The documents, which were provided to the Times by someone with legal access to them, include details that Trump paid just $750 in personal income taxes in 2016 and again in 2017 and none at all in 10 of the 15 years before that.

Kung Flu to you, Donald!