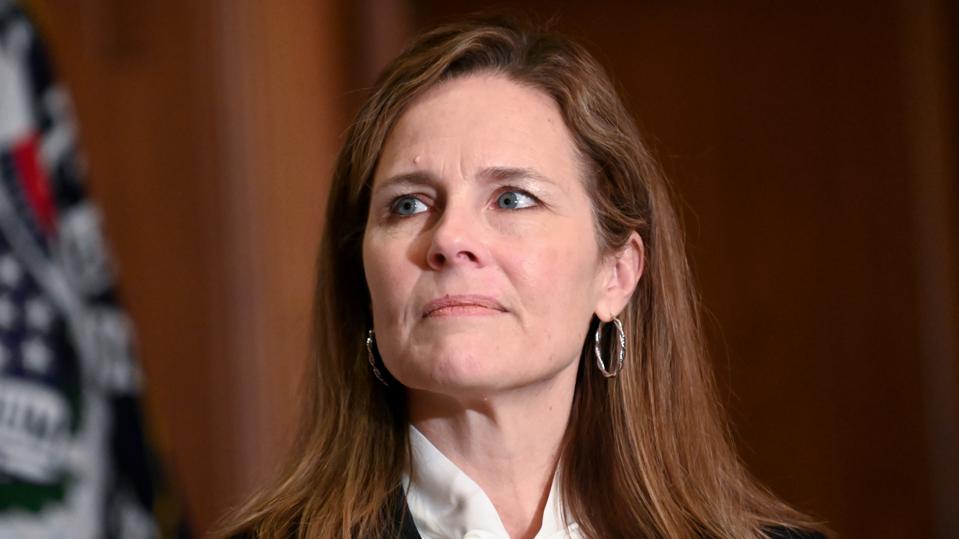 Judge Amy Coney Barrett, President Trump’s nominee to the US Supreme Court, will come before the Senate Judiciary Committee starting today.  These deliberations will garner a good deal of attention as Republicans and Democrats spar over her qualifications especially as to her positions on social issues such as women’s rights, abortion and gay rights. One aspect of her personal life that will likely come up is her association with a Roman Catholic religious organization known as the People of Praise.  According to its website, the People of Praise was founded in 1971 in South Bend, Indiana, and now has 22 branches and 1,700 members across North America.  It considers itself a non-partisan religious community not a church. The Associated Press has a review of the organization including interviews with previous members.  The entire review is below.  It is illuminating.

Supreme Court nominee Amy Coney Barrett’s affiliation with the Christian community People of Praise is drawing scrutiny because of what former members and observers describe as its ultraconservative views on women. Her defenders say scrutinizing her beliefs and relationship to the mostly Catholic organization is akin to anti-religious bigotry.

But in interviews with a dozen former members of the organization and graduates of the schools it runs, most told The Associated Press that Barrett’s association with the group should be examined when the Senate takes up her nomination beginning Monday.

Some were proud and excited that one of their own could soon be on the high court, in a position to roll back abortion rights.

Others were deeply concerned about that threat, and also about the community’s teachings on gender, gay rights, and other social issues. They also raised flags about what they describe as the organization’s authoritarian structure.

Some wondered why Barrett has not disclosed or even acknowledged her connection to People of Praise and why the group appeared to try to hide her affiliation by deleting documents from its website.

“I don’t think membership in the group is disqualifying,” said Rachel Coleman, who left the community in 2010. “I think that she needs to be open about it and transparent about it.”

The AP has documented extensive ties Barrett and her family have to the community, including that an old directory listed her as being one of the organization’s “handmaids,” now called a “woman leader.” She was a trustee of the group’s Trinity Schools, and as a young law student, lived in a house owned by one of its co-founders.

People of Praise is not a church, but a faith community. It grew out of the Catholic charismatic movement rooted in Pentecostalism that began in the late 1960s. The movement emphasizes a personal relationship with Jesus and can include baptism in the Holy Spirit, speaking in tongues and prophecy, according to former members and experts who have studied the movement. People of Praise was founded in 1971 in South Bend, Indiana, and now has 22 branches and around 1,700 members across North America, according to its website.

While it includes people from several Christian denominations, most of its members are Roman Catholic.

Among its teachings are that men are divinely ordained as the “head” of both the family and faith, and it is the duty of wives to submit to them, according to current and former members. People who have been involved in and studied the organization say it is authoritarian and hierarchical, and some former members told AP of practices such as leaders deciding who can date who.

The group has a strong communitarian bent. It encourages members to live in the same neighborhoods. Single people often live with families in the community or together in same-gender communal households, where they pool resources or even turn their paychecks over to be shared, according to articles previously published on the organization’s website, as well as former members. People who join the community must sign a “covenant,” in which they pledge love and service to fellow community members and to God. Members agree to give at least 5% of their income to the community, according to their website.

The AP left messages with more than a dozen current members of the organization and scores of former members. Several declined to comment, and about a dozen agreed to interviews. Several spoke to AP on condition of anonymity because they have family involved in the community.

A People of Praise spokesman declined to comment on the current and former members’ views.

“The People of Praise does not take positions on partisan political matters, legislation, or constitutional interpretation. Similarly, we take no position on who should or should not sit on the U.S. Supreme Court,” spokesman Sean Connolly wrote.

Coleman’s husband grew up in the community and when they were dating, she agreed to go “underway,” a multiyear process that members undertake before signing the covenant. Coleman said People of Praise offers a strong sense of community that is often missing in modern secular life, and that can be a powerful draw.

“They really are about living in the community and serving and giving back and helping and building God’s kingdom on earth in a way that’s easy to feel really, really passionate about,” Coleman said.

But she said the organization adheres to outdated and troubling ideas on gender, such as that a woman’s “spiritual head” is her husband, while a man’s spiritual head is outside the marriage, with a man in the community. She wonders why members haven’t pushed for change.

Barrett grew up in the community, Coleman noted, and as an adult, made the choice to join.

“What does her membership in People Praise mean that she believes about gender roles?” Coleman asked, adding, “She signed on to it.”

Particularly notable is that Barrett would be replacing the late Justice Ruth Bader Ginsburg, who in her career stood against practices such as women not being able to get credit cards in their own names.

“It just kind of bothers me to feel like someone’s being put in her seat who signed into the same sort of oppressive gender ideas that Ruth Bader Ginsburg was trying to overturn,” Coleman said.

She and others said Barrett should make public the covenant she signed to become a member, so people can read for themselves the pledge she made to become a permanent part of the community.

Mary Belton thinks Barrett’s history with People of Praise is disqualifying. Belton was in 8th grade, around 1990, when she says her family was cast out after her mother came out as gay. She said the community they had been so close to in South Bend then shunned them.

“When we were kicked out, I literally thought that my that my mom was this awful sinner, and she’s going to this literal fiery hell. And that if I supported her, that I was going there, too,” Belton said.

She said it took her years to let go of teachings that she grew up hearing while involved with People of Praise, and that she now believes are deeply damaging. Barrett, she believes, will not be able to set those teachings aside.

“It’s worrisome. It’s who she is,” Belton said. “Anyone that I know, including myself, that has grown up in it and has left has had to go through a huge transformation and rewiring of your personhood, of your brain, of your soul and spirit.”

Cara Wood graduated from Trinity School at Meadow View in Falls Church, Virginia, in 2010. She recalled that the school’s views on sexuality were “deeply repressive,” where girls and boys were not allowed to hug or touch. Wood said it took her years to realize she was bisexual because “nothing in my environment made it possible that I could be anything but straight.”

Wood says she worries about Barrett’s nomination because she recalls Trinity students being encouraged to get the best education they could to then “take positions of power in the community,” such as doctors and lawyers. Trinity schools, with small class sizes and a rigorous curriculum, serve grades six through 12, boast of high SAT scores, and national awards.

“They are specifically attempting to influence politics and power in the United States,” Wood said. “This is to me why Amy Coney Barrett is so dangerous, because (People of Praise) could not have a bigger win than landing a Supreme Court justice for life.”

Others pushed back against that idea, saying teachers were trying to get across the idea that students provided with a stellar education had the responsibility to give back to society.

Several former members said they opposed Barrett’s nomination in full or in part because it comes under a cloud so late in President Donald Trump’s term. Gene Stowe, who left People of Praise on good terms in 2011 and who spent years teaching at the Trinity School in South Bend, said he doesn’t think it’s right for Trump to fill the seat.

But if Trump does get a pick, Stowe says the best-case scenario is Barrett.

“She’s smart, and I think she’s reflective,” Stowe said. “Because that’s what the People of Praise does to people. It makes you deliberative.”

Others were thrilled by the nomination, without reserve. Those included Peter Radosevich, a former longtime member in the Appleton, Wisconsin, branch.

He described the community as family oriented and internally focused, and very conservative, in the vein of evangelical Christians. The groups stays away from politics, he said, except in one area: abortion.

Susie Lea, a retired Catholic sister who left the Shreveport, Louisiana, branch last year, said she recalled hearing about Barrett within the People of Praise when Barrett’s name was first floated for the Supreme Court two years ago. Lea has not met Barrett, but based on what the judge has said publicly and due to her involvement in People of Praise, Lea believes Barrett agrees with her that abortion is wrong and will vote against it if she were on the court.

Lea believes Barrett’s association with People of Praise may have had a hand in her nomination.

“I’m hoping it helped her, you know, all our prayers lifting her up,” Lea said. “I just think that prayers work. If it’s the will of God, that it will work.”