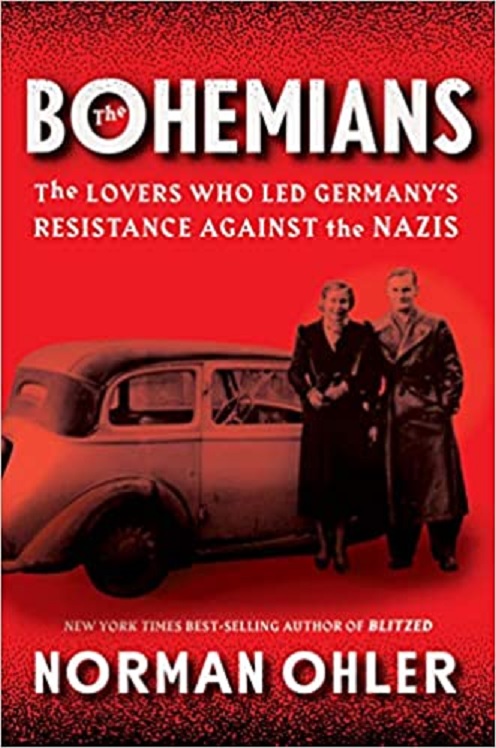 I have just finished reading Norman Ohler’s, The Bohemians:  The Lovers Who Led Germany’s Resistance Against the Nazis.  It is the story of a husband and wife who organize a resistance movement in Berlin in the 1930s and continue it through 1942.  Harro Schulze-Boysen and his wife Libertas came from well-regarded German families, and held administrative  positions in the Luftwaffe and the German Ministry of Propaganda respectively.  They lead a network of anti-fascist fighters in Germany’s bohemian underworld of artists, writers, and philosophers.  They pass military information onto the Soviets, distribute anti-Hitler and anti-Nazi leaflets, and write essays exposing the horrors of the Third Reich.

Theirs is essentially a suicide mission because the Gestapo is unrelenting in rooting out dissidents. In 1942, Harro, Libertas and the members of their entire operation are arrested, tried and executed.  They are hanged,  their bodies dismembered and then cremated with no return of ashes to families.  Just before they are to executed, they are allowed to write letters to their loved ones.  Harro concludes his letter to his parents:

“..now I reach my hand out to you both and place here a single tear as a seal and pledge of my love.”

It is a riveting but sad tale that Ohler has written.  I highly recommend it.

A New York Times Book Review is below.

The Bohemians:
The Lovers Who Led Germany’s Resistance Against the Nazis
By Norman Ohler

Children of Holocaust survivors grow up in the war’s shadow. Unwittingly, we remain shackled to an inheritance that reverberates through generations. Yet the trauma is not limited to those close to victims. The families of the perpetrators, of those who resisted and of those who failed to act must all cope with the past.

With his opening scene, Norman Ohler masterfully establishes his trustworthiness as narrator, which is crucial as we travel with him back to the 1930s and then on through the war.

The German writer Norman Ohler begins “The Bohemians: The Lovers Who Led Germany’s Resistance Against the Nazis” with a powerful scene from his own life that perfectly encapsulates the guilt, grief, anger and remorse that have haunted so many of us. As a 12-year-old, Ohler asks his beloved grandfather, his “Pa,” about his role in the war. Then an engineer, now a frail old man, he describes seeing SS guards, a freight train and then a child’s hand through a crack in the train car’s boards. But the grandfather does nothing. “I was scared of the SS,” he helplessly explains. Young Ohler is stunned, and in that moment of “stillness you could hear,” he cannot contain his hatred for his Pa.

Best known in Germany as a novelist, Ohler is also the author of “Blitzed,” a controversial 2017 best seller about rampant drug use in the Third Reich. With the opening scene of “The Bohemians,” another work of nonfiction, he masterfully establishes his trustworthiness as a narrator, which is crucial as we travel with him back to the 1930s and then on through the war. He weaves a detailed and meticulously researched tale about a pair of young German resisters that reads like a thriller but is supported by 20 pages of footnotes. “I find it particularly important in this case, where the truth has been distorted many times,” he writes, “not to add another legend but to report as accurately as possible, combining my skills as a storyteller with the responsibility of the historian.”

The story he reconstructs is that of Harro and Libertas Schulze-Boysen, drawing on letters, articles, diaries and interviews to acquaint us with the couple in all their complexity — engaging, bold and flawed. Harro, originally a student activist, underground writer and publisher, and eventually an employee of the German Air Ministry, is the pair’s intellectual driving force. He is ambitious and stoic, an idealist. Libertas is more whimsical, and also initially a Nazi Party member. She dreams of being a poet and is working for Metro-Goldwyn-Mayer when she first encounters Harro. Her decision to resist seems to be based more on circumstance than principle, but she is deeply resourceful and loyal. We feel the couple’s triumphs intimately and, as the net tightens around them, their sorrows.

Young, passionate and liberal, they defy the regime with their unconventional lifestyle — including an open marriage and love of wild gatherings bringing together people of diverse backgrounds and political leanings. And, more dangerously, they pass on information about Nazi atrocities to enemies of the Reich, support Jews, produce pamphlets and establish links with Soviet intelligence. At a time when, as Ohler puts it, “propaganda and suppression increasingly dominate daily life” and “culture is being destroyed,” they cut remarkable figures.

For decades, Ohler writes, historians were reluctant to carry out a “genuine investigation” of the couple’s anti-Nazi circle. It was widely believed that German resistance spread little beyond the White Rose and the Stauffenberg plot. For political reasons, both East and West Germany subsequently sought to erase from history details of the brave resistance work of Libertas and Harro and their group. Family and friends were silenced, and in both East and West Libertas and Harro were posthumously lionized as Soviet spies. The reality was more subtle and fraught. Theirs is a tragic tale of defiance, espionage, love and betrayal.

Ohler employs the present tense throughout, imbuing his account with a sense of urgency and reminding us that the past in many ways remains our present. His only deviation into the past tense is in the foreword, where he discloses his grandfather’s agonized recollection — a failure to act for which the resistance narrative of “The Bohemians” serves as a kind of atonement.