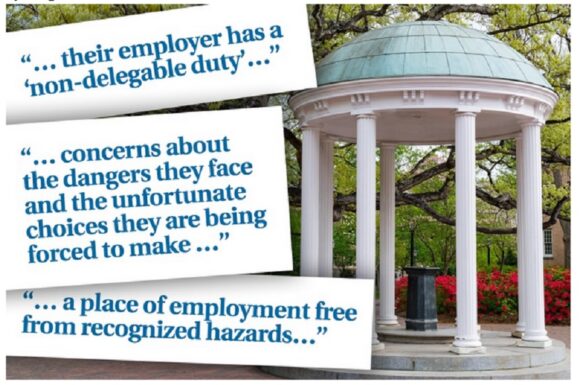 Photo illustration by The Chronicle of Higher Education

The Chronicle of Higher Education is reporting this morning that faculty and staff at the University of North Carolina system’s 16 campuses are preparing a lawsuit to postpone the start of classes this fall.  As reported.

“North Carolina is among several states that have recorded record-high numbers of Covid-19 cases in recent days, and the White House Coronavirus Task Force has tabbed the state as a “red zone.”

Bringing 10,000 people to campus and into the community just seems like a terrible mistake.

Early this month, 37 people in the Chapel Hill campus’s athletics department tested positive for Covid-19, resulting in a pause on voluntary football workouts. (Housekeeping staff responsible for cleaning areas where the infected people had been living and working were not told about the infections.) The system, meanwhile, is preparing to open for in-person instruction, although specific plans differ from campus to campus.

None of those plans comport with the state’s obligation to keep its employees safe, said Gary Shipman, a lawyer who is an alumnus of the University of North Carolina at Wilmington and a former member of its board of trustees. He cited North Carolina employment law, which outlines the state’s “non-delegable duty” to ensure its employees “conditions of employment and a place of employment free from recognized hazards that are causing or are likely to cause death or serious injury or serious physical harm to his/her employees.”

For the system to claim it can meet that duty, Shipman said, is “foolish.” “I’m ready for UNC to parade Dr. Fauci, or somebody like him, to look at my clients, to say, ‘You’re fine, you’re good,’” Shipman said. “They’re not doing that, because they can’t.”

System officials did not immediately respond to The Chronicle‘s request for comment. But a spokesman issued the following statement this week to a North Carolina television news station in response to the expected lawsuit: “The UNC System is prioritizing the health and safety of all of our students, faculty, and staff. We have consulted with the foremost medical professionals and disease researchers, including at our member institutions, and are taking the necessary precautions to ensure our campuses are safe places to teach, study, live, and work.”

I don’t think the UNC will be the only university system facing such lawsuits.