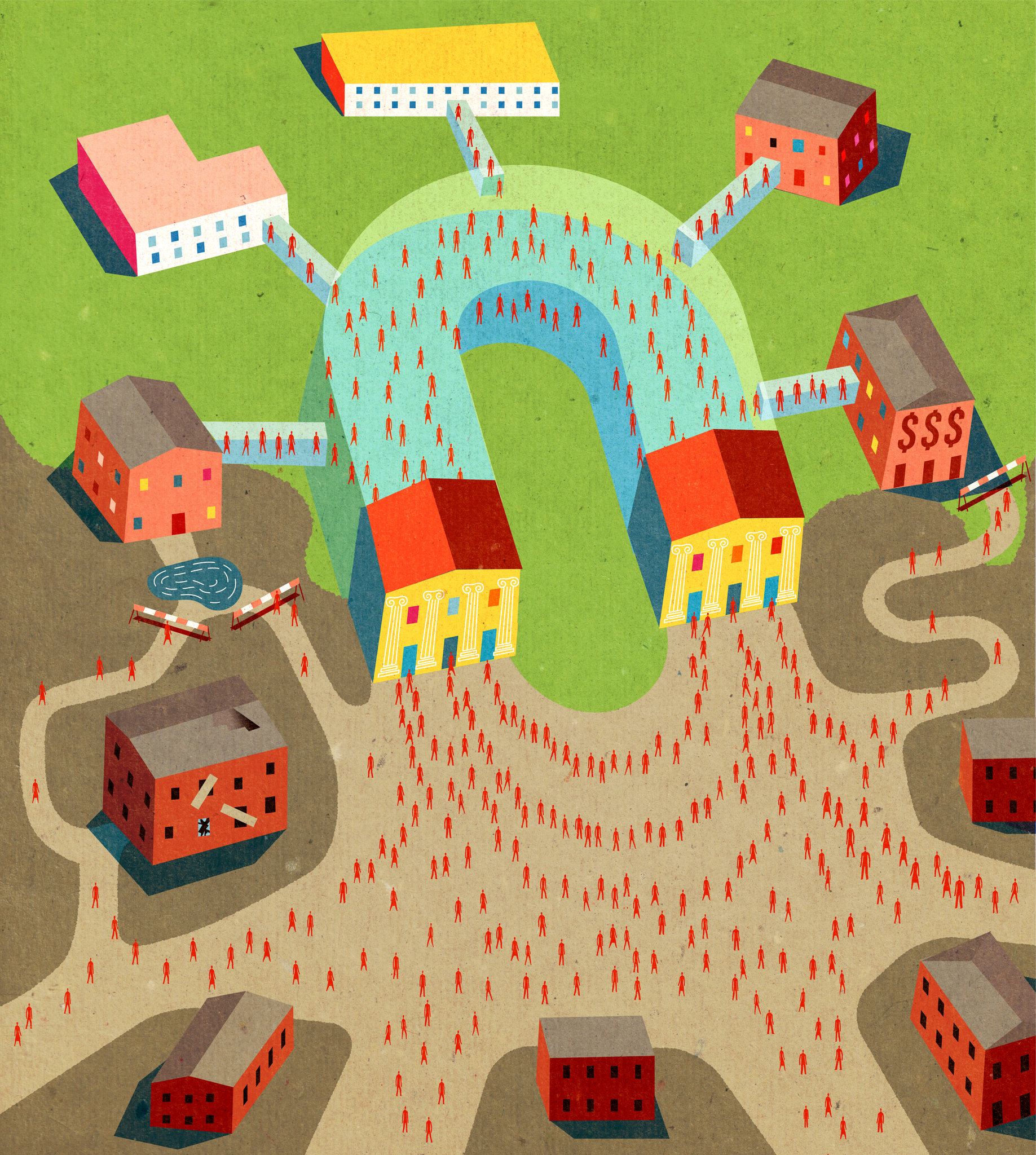 The Pennsylvania State System of Higher Education has taken the first step toward consolidating several of its campuses in response to a decade of enrollment drops and financial pressures.

The system’s Board of Governors voted yesterday to authorize Daniel Greenstein, the system chancellor, to conduct a review of what merging six of its 14 universities would mean for the system financially.  As reported by The Chronicle of Higher Education.

“We’ve got to figure out a way to sustain viable, affordable educational activity at our universities,” said Greenstein in an interview before the board’s meeting, “not just for their communities and their students — although that’s vitally important — but as a matter of financial importance.”

As part of the review, the system plans to explore the possibility of merging six universities: California and Clarion Universities, Lock Haven and Mansfield Universities, and Edinboro and Slippery Rock Universities.

It’s not yet clear how the combined institutions would be named or branded, although Greenstein said that “local brand identity” was important and should be respected. He said he envisioned that each pair of merged institutions would have a single leadership team, budget, and enrollment strategy, but other aspects of consolidation remained unclear. “The reason we’re on this process,” he said, “is to find out the answers to those questions.”

Pennsylvania, like many states in the Northeast and Midwest, faces a dwindling number of college-bound high-school graduates, and enrollment in the system, known as Passhe, has sunk from 119,513 students in the fall of 2010 to 95,782, a decline of 20 percent. A 2017 report on the system, compiled by the National Center for Higher Education Management Systems, warned that “it is just a matter of time before all of the universities become financially unsustainable.”

Greenstein, a former director of postsecondary success at the Bill & Melinda Gates Foundation, took over as chancellor in 2018, and began trying to right the system’s slide. Over the past two years, the system has renegotiated its labor agreement with the Association of Pennsylvania State College and University Faculties, increased its use of shared services among institutions, and lobbied the state government for legislative changes that would allow the system to restructure itself without state approval. Gov. Tom Wolf, a Democrat, signed such legislation this month.

Greenstein reviewed for the board several options to solve the system’s financial woes, including dissolving the system, closing institutions, increasing state funding, and maintaining the current course.

Closing institutions would hamstring the economic and educational life of their regions. It would also transfer flailing campuses’ financial obligations to the other institutions in the system — tens of millions of dollars in debt laid on the other universities, many of which are already struggling. Greenstein estimated that the state would need to provide an additional $350 million over two years to stabilize the universities’ budgets, at a time when state-support levels everywhere are endangered by economic turmoil caused by Covid-19. The system could try to continue with 14 independent institutions, but, he said during the meeting, “everything would have to go flawlessly” to avoid financial ruin.

Greenstein recommended the board support the exploration of consolidations. Many details remain uncertain, but the system needs to look into that possibility in order “to figure out whether the juice is worth the squeeze,” he told the board.

The system needs to look into mergers ‘to figure out whether the juice is worth the squeeze.’

Strategic mergers of certain campuses would save money for the system, “but we can’t cut our way out of this situation,” Greenstein said in the interview. “We really have to think about this in terms of growth opportunity. And the opportunity is in reallocation [of resources] into areas that allow us to grow.”

Each prospective merger will be considered with a strategic goal in mind, Greenstein said. California and Clarion, both in western Pennsylvania, have substantial online operations that could be combined to better serve undergraduates and working adults hoping to complete a degree. Lock Haven and Mansfield, in the rural center of the state, would focus on work-force development, including nondegree credentials. Slippery Rock, which has enjoyed enrollment growth and fiscal stability, would join with Edinboro, which has struggled, to create a larger university that could compete “more effectively in the western part of the state, Ohio, and the surrounding region,” he said.

Reached after the meeting, a spokeswoman for the faculty union said it “needs to learn more about the state system’s plans before commenting on them.”

The importance of the system’s educational mission persuaded the Board of Governors to support the review, said Brad Roae, a board member and a Republican state representative: “We want to make sure that students everywhere in Pennsylvania have access to a Passhe university.”

Greenstein plans for the financial review to be completed in the fall. If the Board of Governors accepts its recommendations, the system would develop a plan and solicit public comments. If approved, the mergers would take effect in the fall of 2022 at the earliest.”

Pennsylvania is following other states such as Georgia, Wisconsin, and Connecticut.