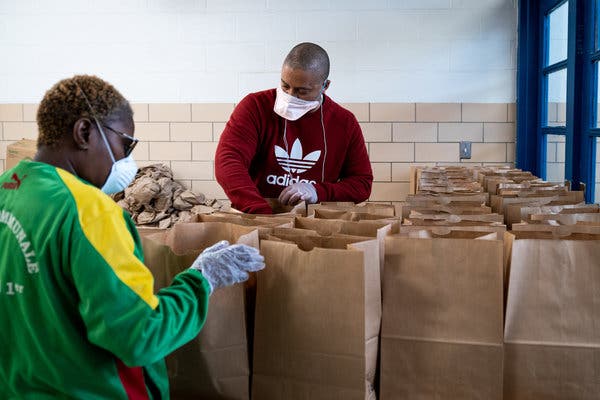 Many school cafeterias around the country are now operating more like community soup kitchens, even though the federal school meals program won’t reimburse districts for meals served to struggling adults.  The images of relief workers handing out bags of food remind me of those from the Great Depression.  The New York Times has a featured article this morning describing food relief efforts in various schools and cities such as Sinclair Elementary School in Baltimore, Maryland.

The entire article is below.

God bless these relief workers.  They are our heroes!

Schools Transform Into ‘Relief’ Kitchens, but Federal Aid Fails to Keep Up

BALTIMORE — On the first day of the coronavirus school closure at Sinclair Lane Elementary School, Janet Bailey, the cafeteria manager, showed up to the school’s kitchen like any other day, ready to do her job. She began fixing the favorites of the 250 or so children who relied on her to feed them daily — chicken patties, a fruit and vegetable, and flavored milk.

On the second day, Ms. Bailey realized that she had answered a calling. By the time the building in northeast Baltimore had opened at 10 a.m., there was a line. Among the first was a man who said he only had a half a loaf of bread in the refrigerator.

“I just packed him up, no questions asked,” said Ms. Bailey, one of dozens of food service workers who signed up to staff meal sites around the city. “I didn’t know his situation, if he had four kids at home or not, like he said. But I know he was hungry. We are supposed to be here to meet the needs of the community. How could I say no?”

After the coronavirus shut down America’s education system, districts fortified their school meals programs to ensure that their most needy students would stay fed. One month in, school leaders realize the federal programs set up to subsidize the meals of tens of millions of students cannot meet the demands of an emergency that has turned their cafeterias into food banks and community kitchens.

Several districts are now feeding adults and sending days’ worth of food home for entire families. And they are doing so at a cost that under federal rules they will not recoup, and at a rate that is financially unsustainable.

Under the child nutrition programs run by the Department of Agriculture, districts are partially reimbursed for each meal served to their poorest students. But districts are incurring costs that do not qualify, for adult meals, additional equipment and extra pay for food service workers who are risking their safety.

“We are supposed to be here to meet the needs of the community,” said Janet Bailey, the cafeteria manager at Sinclair Lane.

The nation’s 12 largest school districts will spend $12 million to $19 million through June 30 to meet the demands of their pandemic meals operations, estimated Katie Wilson, executive director of the Urban School Food Alliance, whose members include large urban districts in Los Angeles, Baltimore, New York and Chicago.

The organization is pleading for relief from Congress, the Agriculture Department and the Federal Emergency Management Agency. Meantime, the organization has set a donation page to help districts cover costs.

“Every one of these schools that has their doors open are literally heroes on the front line,” Ms. Wilson said. “Food workers are now first responders.”

Collectively, the districts in the alliance serve 3.6 million students and 635 million meals annually. But in weekly calls since the pandemic started, the districts have reported that nothing had prepared them for the demand they have seen. Families are traveling to their meal sites from neighboring jurisdictions. Residents are showing up from senior living communities. Some families became known as “trick-or-treaters,” hitting up different sites throughout the district.

“If people are in need, we’re going to address the need, end of discussion,” Austin Beutner, the superintendent of the Los Angeles Unified School District, said in an interview. “Our inclination is to do the right thing.”

Los Angeles, the nation’s second-largest school system, is serving between 400,000 and 500,000 meals a day since its schools closed, and will serve its 10 millionth meal this week. About 30 percent of those meals are going to family and community members, so they will not be reimbursed.

The nation’s 12 largest school districts will, according to one estimate, spend $12 million to $19 million through the end of June to meet the demands of their pandemic meals operations.Credit…Erin Schaff/The New York Times

The district has had to purchase 18 refrigerated trucks to store food and milk, which will cost more than $95,000 over the next three months.

“This is not a school meal program,” Mr. Beutner said. “It’s a relief effort.”

The nation’s largest school district, in New York City, will serve anyone who needs food, Mayor Bill de Blasio announced this month, a decision that drew some pushback from food service employees who lacked protective gear.

The New York City Department of Education said that it was serving about 250,000 meals a day, and had served about four million meals since its schools closed. Any student meals that are not partially reimbursed by the federal government will be funded by the city’s budget.

Since the shutdown, the Agriculture Department has loosened rules to allow schools to serve meals outside group settings, and states to serve after-school snacks and meals without an educational activity. It is also allowing parents to pick up meals without their children.

A spokeswoman for the Agriculture Department said it was aware that “some schools are opting to allow adults to buy meals for themselves or providing them with meals.” But she said those meals would not be reimbursed. Needy adults, she said, should be turning to the Supplemental Nutrition Assistance Program, formerly known as food stamps, which the administration has moved to cut with three separate rule changes.

“For schools that are closed, we are doing our very best to make sure kids are fed,” Agriculture Secretary Sonny Perdue said. “Local school nutrition professionals know how best to feed their children, and we are working with them and their community partners.”

Regulatory hurdles persist. In areas where fewer than half the children were eligible for free or reduced-price meals, school meal providers at first were still having to verify that each child was low-income. The department has since relaxed its rules to allow states to serve students who may not qualify for the program during the school year. But state rules vary. In Mississippi, some school sites with fewer than 40 percent of students eligible for reduced price meals still must justify giving out food. Massachusetts got statewide approval to waive proof of income.

“We are hoping for a nationwide waiver because those waivers are not consistent across states,” said Crystal W. FitzSimons, the director of school programs at the Food Research and Action Center.

Arne Duncan, a former education secretary who has been helping school superintendents through the crisis, said any government response short of enabling schools to become full-blown food distribution centers was insufficient.

“We can’t be constrained by rules and regulations that make no sense now,” said Mr. Duncan, who is now a managing partner at the philanthropic organization Emerson Collective. “All we need is some compassion, common sense and flexibility.”

Some schools are partnering with community food banks — many of which are also struggling to keep up — Y.M.C.A.s, and Boys and Girls Clubs to get meals out. All the while, many school districts still lack essential personal protective equipment. In March, districts in California, Louisiana, Michigan, Missouri, Tennessee, Texas and West Virginia had to suspend or adjust their meals program because employees contracted the coronavirus or feared they would. In early April, a food service worker in Clark County, Nev., the nation’s fifth-largest school district, died from Covid-19.

School districts are already beginning to talk about financial challenges for the next school year, said Diane Pratt-Heavner, a spokeswoman for the School Nutrition Association. By then, many will have little inventory and insufficient revenue to purchase more.

“I’m not sure schools can sustain the same level of outreach,” said Lisa Davis, the senior vice president of the No Kid Hungry campaign at Share Our Strength, a nonprofit organization working to end childhood hunger. 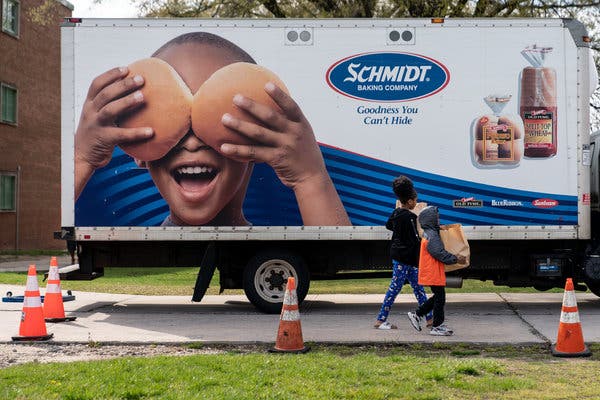 Ms. Bailey can rattle off her daily tallies as easily as her phone number. “688 today — 108 adults for breakfast, 108 adults for lunch,” she said with a tinge of disappointment. That was fewer than her average of 800, but thunderstorms had blown through that day.

Even though the site opens at 10 a.m., Ms. Bailey adjusted her staff’s schedules to prepare for those who show up as early as 9:30, and for the stragglers who run up with panicked looks a few minutes after it closes at 2 p.m.

She knows mothers and fathers by name, which children are lactose intolerant, and who among the vegetarians need peanut butter and jelly sandwiches. She’s become resourceful: When the local food bank recently dropped off a box of 40 meals, she unpacked it and stretched them into 80.

“You hear the stories about the health care workers — well, we’re on the front lines, too,” she said. “We’re on our feet from the time we come in the door to the time we leave. We’re doing something that’s bigger than what we can imagine right now.”

The district recently switched to cold meals in April to make it easier and safer for families to “grab ’n’ go.” On a recent sunny Tuesday, city residents walked up in their house slippers and drove up in luxury S.U.V.s. There were unaccompanied children, and older residents with handicap parking placards.

The only question asked was, “Chicken salad or deli?”

“I always tell them, thank you for your service because it’s well appreciated,” said Al Peterson, 62, who picked up meals for three children and two adults. “I get an extra one to take to my homeless guy down the street, too.”

Tia Gardner, the owner of My Village Learning Center, a day care in northeast Baltimore, said the free meals were allowing her to stay open. She is taking care of 24 children, all of essential employees, like health care workers. That is down from 62.

“Food is one of our biggest budget items,” Ms. Gardner said. “If I’m able to stay open, it eases the minds of parents who still have to go to work.”

On Friday, Sinclair Lane Elementary closed out its busiest week to date — 4,056 meals served, 1,307 of them to adults. Ms. Bailey said she hoped that the federal government would step up, but regardless, “as long as the people are coming,” she said, “we’ll be serving.”