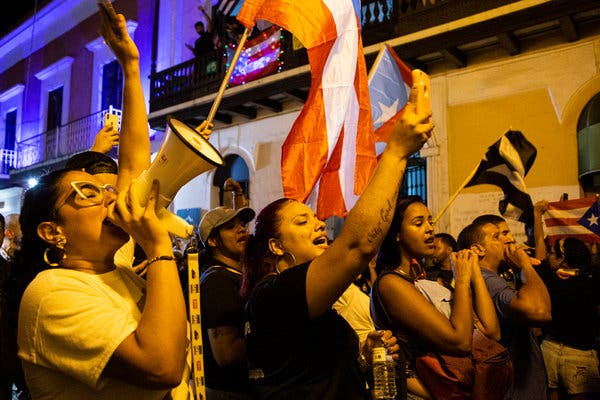 Last night, Ricardo A. Rosselló of Puerto Rico announced his resignation as governor, conceding that he could no longer remain in power after a people’s uprising and looming impeachment proceedings had derailed his administration.  As reported in the New York Times:

“In a statement posted online just before midnight, Mr. Rosselló, 40, said he would step down on Aug. 2.

He said his successor for the moment would be the secretary of justice, Wanda Vázquez, a former district attorney who once headed the island’s office of women’s affairs. Ms. Vázquez was next in line under the commonwealth’s Constitution because the secretary of state, who would have succeeded Mr. Rosselló as governor, resigned last week when he also was caught up in a chat scandal that enveloped the administration.

Rosselló’s ouster by popular demand meant more to Puerto Ricans than a rejection of his administration. It amounted to a resounding repudiation of decades of mismanagement and decline that everyday people blamed on politicians in San Juan and Washington.”