Various media are reporting that Senior White House aide Kellyanne Conway should be removed from federal service for repeatedly violating a law that prohibits government employees from engaging in political campaigns, the U.S. Office of Special Counsel said this morning.

The independent federal agency ― which is different from the Justice Department office once operated by Robert Mueller ― sent a report to President Donald Trump this morning outlining numerous occasions in which Conway violated the Hatch Act by disparaging Democratic presidential candidates while speaking in her official capacity on TV and in social media.

“Like with other presidential appointees, the President has the authority to discipline Ms. Conway for violating the Hatch Act,” the OSC said a statement. “Given that Ms. Conway is a repeat offender and has shown disregard for the law, OSC recommends that she be removed from federal service.”

The White House quickly fired back at the OSC’s recommendation, accusing the agency of taking “unprecedented actions” that violate Conway’s “constitutional rights” and attempting to “weaponize” the Hatch Act.

“Its decisions seem to be influenced by media pressure and liberal organizations ― and perhaps OSC should be mindful of its own mandate to act in fair, impartial, non-political manner,” White House deputy press secretary Steven Groves said in a statement. 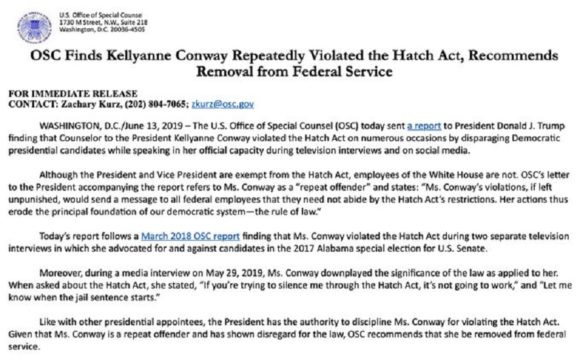