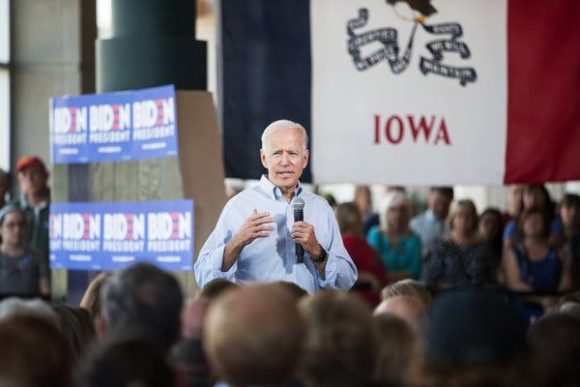 President Donald Trump and former Vice President Joseph R. Biden  ripped into each other yesterday as unfit to lead the country as they both traveled through the state of Iowa, giving voters a preview of what a general election matchup between the two men might look like.  As reported by The New York Times:

“In the most ferocious day of attacks in the six-month-old presidential campaign, Mr. Trump resorted to taunts and name-calling over several hours, saying Mr. Biden was “a loser,” “a sleepy guy” and “the weakest mentally,” and claiming that “people don’t respect him.” Mr. Biden took a different tack, laying out ways Mr. Trump was “an existential threat” to the country, its international standing and its values.

Mr. Biden, who leads in early polls for the Democratic presidential nomination, also brought up subjects he had previously avoided with reporters, such as Mr. Trump siding with the North Korean state media’s insults on Mr. Biden’s I.Q.

”He embraces dictators like Kim Jong-un, who’s a damn murderer and a thug?” Mr. Biden said at his second event of the day, in Mount Pleasant, Iowa. “The one thing they agree on: Joe Biden, he shouldn’t be president.”

The hostile exchanges, which went back and forth across multiple Iowa campaign stops, were the clearest evidence yet that the two men see political advantages in waging a battle against one another at this early stage of the race.

Mr. Biden has largely ignored his 22 Democratic rivals while building his campaign around the urgent need to oust Mr. Trump. Rather than get drawn into squabbles with more liberal candidates or lesser-known ones, he is trying to present himself as presidential material and the most electable Democrat against Mr. Trump — particularly in swing states like Iowa, where the president trounced Hillary Clinton in 2016 after Barack Obama carried the state in 2008 and 2012.

Mr. Trump, mindful of polling that shows him trailing Mr. Biden in several key states, has targeted him with ridicule lately, far more than he has the other Democratic candidates. While the 2020 general election campaign is still a year away, Mr. Trump is repurposing some of his most effective ad hominem attacks from the last election.

In his remarks at an ethanol plant in Council Bluffs, for instance, Mr. Trump claimed that Mr. Biden’s only message was to criticize him, and then brought up his oft-repeated insult for his 2016 opponent, Mrs. Clinton.

“That reminds me of Crooked Hillary,” Mr. Trump said, earning chuckles from the audience. “She did the same thing. And then when it came time to vote, they all said, ‘You know, she doesn’t like Trump very much, but what does she stand for?’ Same thing is happening with Sleepy Joe.”

While they ave attacked each other from a distance, their appearances in the same state on Tuesday seemed primed to intensify the hostility. Mr. Biden wasted no time trying to frame the debate, releasing excerpts at 6 a.m. Tuesday from the remarks he had prepared to deliver at a speech in Davenport in the evening.

Throughout the day, Mr. Biden laced into Mr. Trump over a range of policy issues, such as pursuing an “erratic war on trade” and his approach to tariff negotiations, as farmers — including in this heavily agricultural state — have struggled.

Prior to leaving for Iowa, President Trump told reporters that he would prefer to run against former Vice President Joseph R. Biden Jr. in 2020.CreditCreditDoug Mills/The New York Times

But the sharpest part of Mr. Biden’s remarks in Davenport was his argument that, while the nation “can overcome four years of this presidency,” Mr. Trump would pose an existential threat to “the character of this nation” if he were re-elected and served another term.

He portrayed Mr. Trump’s words and actions as antithetical to the nation’s “core values — what we stand for, who we are, what we believe in,” citing the president’s child separation policy at the southern border and referencing his remark that there were “very fine people on both sides” of the white supremacist march in Charlottesville, Va.

Mr. Biden also argued that Mr. Trump was a threat to “our standing in the world,” noting that the president has attacked NATO while embracing President Vladimir V. Putin of Russia, and saying he had shown poor character by using “crude language” and “embarrassing behavior that is burrowing deep into our culture.” And he said Mr. Trump was undermining American democracy by criticizing law enforcement agencies, defying the authority of Congress and using phrases like “enemy of the people” to describe a free press.

“In 2020, we not only have to repudiate Donald Trump’s policies and values — we have to clearly and fully reject, for our own safety’s sake, his view of the presidency,” Mr. Biden said. “Quote: ‘I have complete power.’ No you don’t, Donald Trump.”

“‘Only I can fix it.’ Fix yourself first,” Mr. Biden said as the crowd enthusiastically drowned him out.

The early excerpts from Mr. Biden’s remarks received prominent attention in the news media on Tuesday morning. Mr. Trump, as he departed the Oval Office, told reporters that he thought Mr. Biden was “a loser” and questioned his mental fitness.

“I’d rather run against, I think, Biden than anybody,” he said. “I think he’s the weakest mentally, and I like running against people that are weak mentally. I think Joe is the weakest up here. The other ones have much more energy.”

After arriving in Council Bluffs, Mr. Trump hinted that he was waiting until his kickoff rally on June 18 in Orlando for his official “political season” to begin. But he couldn’t help but take glancing blows at Mr. Biden in between touting the low unemployment rate and the boom in blue-collar jobs. “He was someplace in Iowa today and he said my name so many times that people couldn’t stand it anymore,” Mr. Trump said. “‘No, don’t keep saying it.’ Sleepy guy.”

Later, Mr. Trump noted that America “would never be treated with respect” under Mr. Biden’s leadership, “because people don’t respect him.”

The attacks by Mr. Trump were, in one way, a boost for Mr. Biden after days of Democratic criticism over his shifting stances on federal funding for abortion. On Tuesday, there was wall-to-wall cable news coverage of the Trump-Biden feud, not of abortion.

Mr. Biden, responding to reporters’ questions in Iowa after Mr. Trump’s attacks, laughed off the president’s remarks about his stamina and mental fitness, and repeated his past statements that voters have a right to question all of the candidates’ ages.

“Look at him and look at me and answer the question,” Mr. Biden said, when one reporter raised those comments. “It’s self-evident, you know it’s a ridiculous assertion on his part.”

“I’m not going to stoop down to where he is,” he said.

Mr. Biden’s face-off against Mr. Trump on Tuesday could have downsides, some Democratic strategists cautioned.

“The Biden campaign clearly seems to relish sparring with Trump. In their minds, they believe it elevates him above the rest of the Democratic field,” said Brian Fallon, who served as press secretary for Mrs. Clinton’s 2016 campaign. “The potential downside is that, as Trump road tests different attacks on Biden, it may help the Democratic primary electorate better visualize potential vulnerabilities that Biden would have in a general election.”

Mr. Fallon said that if any of those attacks — from his supposed lack of energy to his support for the 1994 crime bill — changed voter perceptions, “that could erode the aura of electability that is right now Biden’s strongest asset.”

On Tuesday night, Mr. Trump skipped over Mr. Biden and focused on painting top Democrats as socialists. In a red-meat speech to a red-cap-wearing crowd of 700 Iowa Republicans in West Des Moines, Mr. Trump argued, without evidence, that the United States could tumble into a state of decline like Venezuela under the wrong leadership. He notably name-checked Senator Bernie Sanders, who is set to give a speech on democratic socialism on Wednesday.

“More than 100 Democrats have signed up for the Bernie Sanders government takeover of health care,” Mr. Trump said of Mr. Sanders’s “Medicare for all” plan. “We have 180 million Americans having great private health care. That would all be taken away. Democrats also support the $100 trillion Green New Deal, how about that beauty.” Making an oblique reference to Representative Alexandria Ocasio-Cortez, Mr. Trump said the bill was “made up by a young woman, who is, well, let’s see how she works out.”

Public and private polls that show Mr. Trump trailing Mr. Biden in critical states have contributed to his preoccupation with Mr. Biden, whom the president has told aides to describe as old and feeble (Mr. Biden is 76; Mr. Trump will turn 73 this week).

Up to this point, Mr. Biden has largely resisted responding to Mr. Trump’s individual broadsides, insisting repeatedly that he wants to avoid a “mud-wrestling match” with the president and often ignoring shouted questions from reporters about Mr. Trump’s remarks.

But that hardly means Mr. Biden avoids discussing Mr. Trump. He is centering his campaign squarely on defeating the president, calling him an “aberration.” It is a point of emphasis sharply at odds with several of his Democratic opponents, who believe Trumpism has redefined the Republican Party and say the country needs bigger, structural change that goes beyond defeating one man.

At every turn, Mr. Biden is seeking to keep the focus on a possible general election matchup between himself and Mr. Trump. He has recently visited Pennsylvania and Ohio, important general election swing states, arguing that he is able to connect in the industrial Midwest and torching Mr. Trump’s leadership approach.”

If Biden gets the Democratic presidential nomination, the barbs and verbal confrontations by the two candidates will be blistering.