Meghan McCain hit back at Donald Trump over the weekend after the president attacked the legacy of her late father, Sen. John McCain (R-Ariz.).  As reported in the Huffington Post

“Trump belittled McCain, saying he had “stains” on his career for moves such as his no vote on repealing the Affordable Care Act in July 2017. McCain stunned everyone ― including his Senate colleagues and the president ― when he became the deciding vote against the passage of the Healthcare Freedom Act, the GOP attempt to repeal Obamacare with a bill that would have stripped health care from millions of people.

The daughter of the war hero, who also co-hosts ABC’s “The View,” responded to Trump’s latest tweet about her father with a searing response: “No one will ever love you the way they loved my father,” she said. “I wish I had been given more Saturdays with him. Maybe spend yours with your family instead of on twitter obsessing over mine?”

In a since-deleted tweet, McCain also wrote that her father lived “rent free” in the president’s head.

During his political rise, Trump attacked McCain repeatedly, first by saying early in his presidential campaign that the former senator was “not a war hero” because he was captured and held prisoner during the Vietnam War. The criticisms have not stopped even after McCain’s death last August, several months after he was diagnosed with brain cancer.” 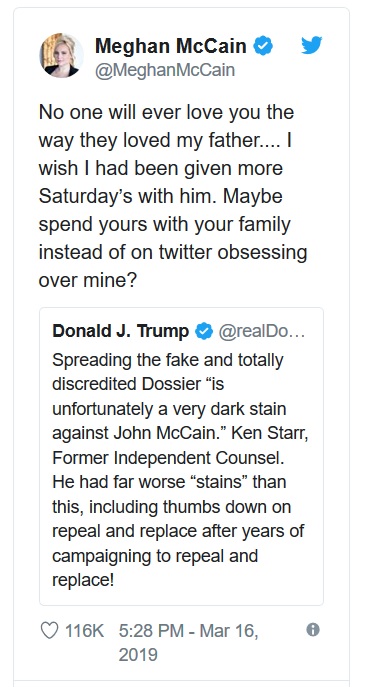