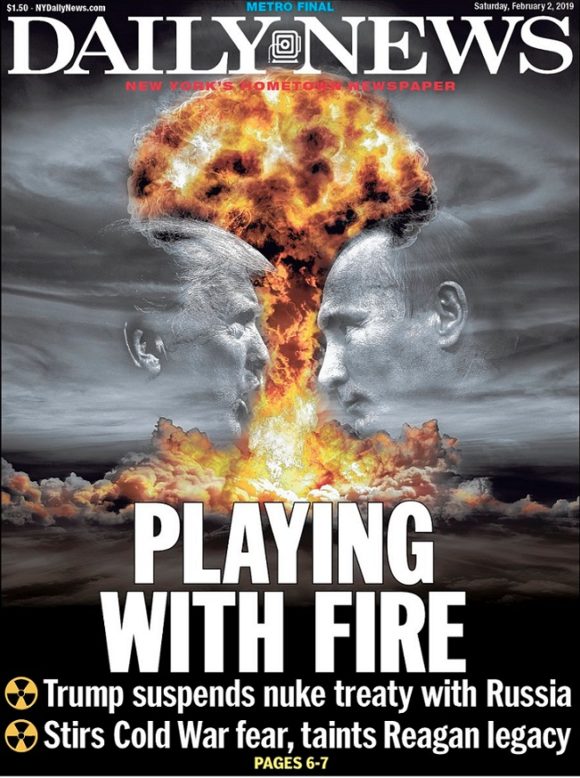 The New York Daily News cover this morning says it all as Donald Trump and Vladimir Putin agree to suspend a nuclear treaty that had been signed in 1987 by Ronald Reagan and Mikhail Gorbachev.    The announcement came just ahead of the expiration of a deadline that Secretary of State Mike Pompeo gave Moscow to come into compliance with the treaty.

Pompeo said yesterday that it was suspending one of the last major nuclear arms control treaties with Russia, following five years of heated conversations over accusations by the United States that Moscow is violating the Reagan-era agreement.

The decision has the potential to incite a new arms race — not only with Russia, but also with China, which was never a signatory to the 1987 Intermediate-Range Nuclear Forces Treaty, widely known as the I.N.F.

It also comes as the United States has begun building its first long-range nuclear weapons since 1991, a move that other nations are citing to justify their own nuclear modernization efforts.

Taken together, the two moves appear to signal the end of more than a half-century of traditional nuclear arms control, in which the key agreements were negotiated in Washington and Moscow.

It is unclear whether President Trump plans to replace the I.N.F. or to renew another major treaty, called New Start, which drove American and Russian nuclear arsenals to their lowest levels in nearly 60 years. That accord expires in 2021, just weeks after the next presidential inauguration.

Secretary of State Mike Pompeo announced the decision to suspend the accord, declaring that “countries must be held accountable when they break the rules.”

“We can no longer be restricted by the treaty while Russia shamelessly violates it,” Mr. Pompeo said, adding that the United States would terminate the accord in six months unless Russia destroyed its growing arsenal of intermediate-range missiles and launchers.

Mr. Trump said later that “I hope we’re able to get everybody in a big, beautiful room and do a new treaty that would be much better.” He did not define what he meant by “everybody.”

The Russian government counteraccused the Trump administration of looking for any excuse to end the Cold War-era agreement. Dmitri S. Peskov, the spokesman for President Vladimir V. Putin, said the United States failed to negotiate in good faith.

“On the whole, the reluctance of the Americans to listen to reason and to hold any kind of substantive talks with us shows that Washington decided to crush the treaty a long time ago,” Mr. Peskov told reporters.