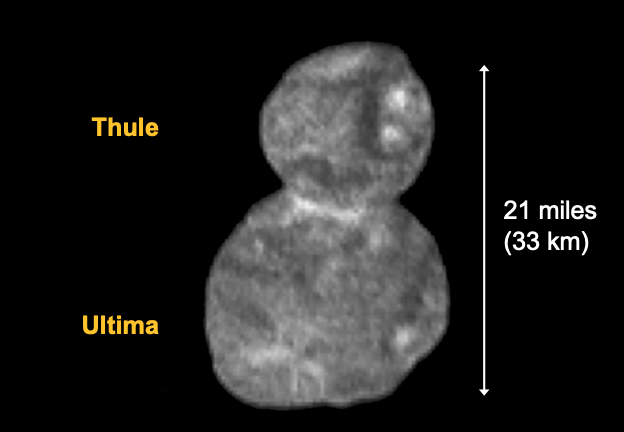 An image of Ultima Thule recorded by NASA’s New Horizons spacecraft of the most distant object ever visited.

NASA ushered in the New Year yesterday by announcing that its New Horizons probe had made its closest approach to a small, icy world nicknamed Ultima Thule. This is the latest triumph in a journey that started in 2006, when the spacecraft launched on a mission to explore Pluto. Thirteen years and more than four billion miles later, New Horizons has provided humanity’s first glimpse of a distant fragment that could be unchanged from the solar system’s earliest days. In the days and months to come, the mission’s scientists expect to receive pictures of Ultima Thule and scientific data that could lead to discoveries about the origins of the sun and the planets.  Here is a description of this accomplishment courtesy of the New York Times:

“Ultima Thule, the name that the mission team selected for the object from more than 34,000 suggestions from the public, means “beyond the borders of the known world.” (Thule is pronounced “TOO-lee.”)

During the flyby, at a distance of about 2,200 miles, the spacecraft was out of communication with Earth because it was busy making scientific observations. Only hours later did New Horizons turn its antenna toward home. Then, it sent a 15-minute update, confirming it had survived the flyby. The message took six hours to travel the 4.1 billion miles at the speed of light to Earth. Future transmissions are expected to convey new pictures and readings from the flyby.

At 10:31 a.m., the operations center at Johns Hopkins, which runs the mission for NASA, confirmed that a radio dish in Madrid, part of NASA’s Deep Space Network, had locked in to the signal from New Horizons.

“We have a healthy spacecraft,” Alice Bowman, the mission operations manager, announced following a methodical check of the spacecraft’s systems. “We’ve just accomplished the most distant flyby.”

Clapping and cheering erupted in the room where the mood had been quiet and nervous a few minutes earlier.

“I don’t know about you, but I’m really liking this 2019 thing so far,” S. Alan Stern, the mission’s principal investigator, said at the start of a news conference on Tuesday.

A new image of Ultima Thule recorded by NASA’s New Horizons spacecraft reveals the elongated shape of the most distant object ever visited.

The scientists revealed new images of Ultima Thule, taken when the spacecraft was still a half million miles away.

Ultima Thule looked like a fuzzy bowling pin or a peanut, roughly 22 miles tall and 9 miles wide. The images also solved a mystery: why Ultima Thule’s brightness appeared unchanging as the spacecraft approached.

Typically, a spinning, irregularly shaped object would rhythmically brighten and dim as it spins.

It turns out that the long-distance camera aboard New Horizons was looking down at one of the poles of Ultima Thule, and thus it was always the same side of the object reflecting sunlight. “It’s almost like a propeller blade,” Dr. Weaver said. “That explains everything.”

The few fuzzy images so far sent home have not yet cleared up how long it takes for the small world to complete a single revolution.

Another question that has not yet been answered is whether Ultima Thule could actually be two small bodies in tight orbit around each other. Dr. Stern and Dr. Weaver said it was more likely that Ultima was a single object.

“If I’m wrong, I’ll tell you tomorrow,” Dr. Stern said. “If it’s two separate objects, this would be an unprecedented situation, in terms of how close they’re orbiting one another. It’d be spectacular to see, and I’d love to see it, but I think the higher probability is that it’s a single body.”

As additional images are sent back to Earth, the scientists will get a clearer picture of the object.

“By tomorrow and the next day, Ultima Thule is going to be a completely different world from what we’re seeing now,” Dr. Weaver said.

The scientists will begin to start counting craters, mapping the surface, looking for moons and rings around Ultima Thule and identifying materials on the surface. By doing so, they hope to gain a better understanding of the thousands of small bodies in the Kuiper belt, a region beyond Neptune strewn with icy debris.

Because the spacecraft is far away, it will take 20 months for all of the data to trickle back. The highest-resolution images taken at closest approach are not scheduled to be sent to Earth until February.

The scientists will continue to pore over incoming data this week, but then take a pause when the sun is in between Earth and the spacecraft, blocking communications. They will meet up again in mid-January.”