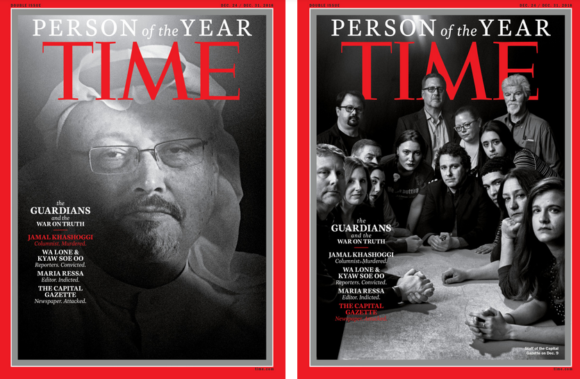 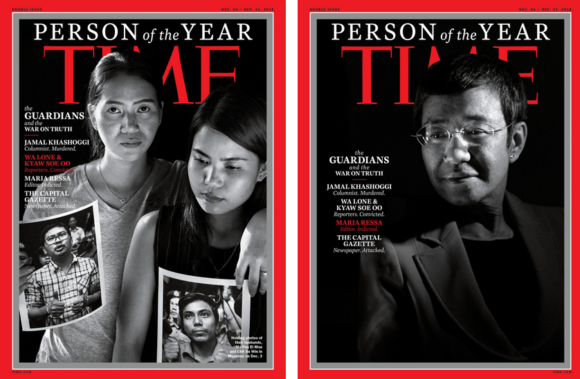 Yesterday Time Magazine announced that its Person of the Year for 2018 was “The Guardians of Truth,” a group of journalists who have been targeted for their work.  A series of four black-and-white covers (above) highlights what the magazine calls “the War on Truth.”

The journalists include Jamal Khashoggi, the Washington Post contributor who was killed at the Saudi Arabian consulate in Istanbul in October. This is the first time that a Person of the Year is a deceased person.  Wa Lone and Kyaw Soe Oo, two Reuters journalists who were arrested one year ago in Myanmar while they were working on stories about the killings of Rohingya Muslims, a minority population in Myanmar’s Rakhine state. The two men remain behind bars. Their wives were photographed for the cover. The Capital Gazette, the Annapolis, Maryland newspaper where five employees were murdered by a gunman last June. And the fourth cover shows Maria Ressa, chief executive of the Philippine news website Rappler who was indicted last month on tax evasion charges — a case that free speech and civil liberties advocates have warned is part of a wider crackdown on dissent by Philippine President Rodrigo Duterte’s administration.

“For taking great risks in pursuit of greater truths, for the imperfect but essential quest for facts that are central to civil discourse, for speaking up and for speaking out, the Guardians” are the Person of the Year, Time editor Ed Felsenthal wrote.

“As we looked at the choices, it became clear that the manipulation and abuse of truth is really the common thread in so many of this year’s major stories.” he said.

President Trump, not coincidentally, was the runner-up for this year’s Person of the Year title. Special counsel Robert Mueller ranked No. 3.

Karl Vick, the author of the Time’s cover story about “The Guardians,” wrote that “this ought to be a time when democracy leaps forward, an informed citizenry being essential to self-government. Instead, it’s in retreat.”

And “the story of this assault on truth is, somewhat paradoxically, one of the hardest to tell,” he added.

Ressa, for example, said she is not allowed to comment on the case against her. (Rappler has said it is politically motivated.)

Speaking with CNN’s Kristie Lu Stout about the recognition, Ressa said “it’s bittersweet and it’s daunting. Look at the challenges we are facing.”

Fellow journalists cheered the selection of Ressa and the other reporters who are on the four covers.

On “Today,” Felsenthal discussed the killing of Khashoggi and the reasons for his inclusion.

“This is the first time we’ve chosen someone no longer alive as Person of the Year, but it’s also very rare that a person’s influence grows so immensely in death,” Felsenthal said. “His murder has prompted a global reassessment of the Saudi crown prince and a really long overdue look at the devastating war in Yemen.”

Excellent choice and may truth win out across the globe including here in the United States.