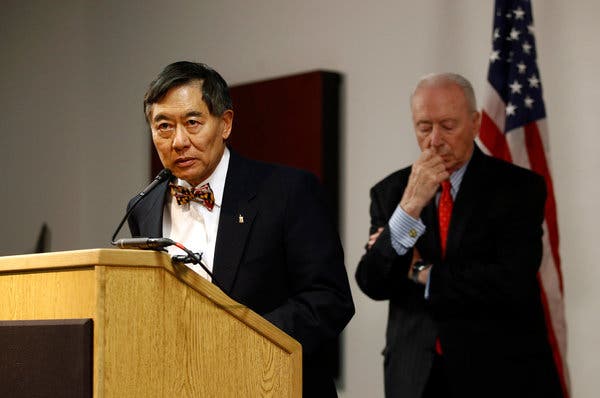 Wallace D. Loh, left, the University of Maryland president, and James T. Brady, chairman of the governing board.

It has been a tough week at the University of Maryland during which the president announced his retirement, the football coach was fired and the chairman of the university’s governing board resigned.  The cause of these departures stem from the death of 19-year-old football player Jordan McNair, who collapsed from heatstroke after practice in the sweltering heat in May and died two weeks later. The resulting controversy became a power struggle among various internal and external pressures over who at the University of Maryland would be held responsible for the McNair tragedy.  As reported by the New York Times, the Associated Press, and Reuters:

“…the week’s turbulence brought to the fore tensions among those trying to protect a big-time college athletic program and those who feared that the handling of Mr. McNair’s death was severely damaging the university’s image and a $1.5 billion fund-raising campaign aimed at elevating the school’s academic standing.

“We have got politicians involved, students upset and the public wondering what’s going on,” said Mike Freiman, a former president of the Terrapin Club, an athletic donors’ organization.

A three-way battle was waged among the university president, Wallace D. Loh; the football coach, D.J. Durkin; and the politically connected chairman of the Board of Regents, James T. Brady. By the end of the week, Mr. Durkin and Mr. Brady were out, and Mr. Loh was headed into retirement at the end of the academic year.

The governor, Larry Hogan, a Republican seeking re-election in a blue state, also entered the fray. As public pressure mounted, with university donors growing upset and his Democratic challenger denouncing his inaction, Governor Hogan voiced his displeasure about how the board was handling the crisis.

The trouble grew on Tuesday after the board announced, as Mr. Loh looked on visibly upset, that Mr. Durkin would remain as the school’s coach, despite a report highly critical of the football program’s culture.

Mr. Loh, who had pushed for the 2014 move to the football-oriented Big Ten Conference, wanted to dismiss Mr. Durkin but was overruled by the Brady-led board.

The resulting public furor emboldened Mr. Loh to buck the board’s wishes and fire Mr. Durkin on Wednesday. Mr. Brady stepped down the next day, having lost the support of Governor Hogan, whose campaign he ran in 2014.

This account of the last week of maneuvering is based on interviews with more than a dozen people close to the process, most of whom declined to be identified because they were not authorized to speak publicly about private conversations. Through representatives, Mr. Loh and Mr. Durkin declined to comment.

Late last week, the 17-member board met at the University System of Maryland headquarters in Baltimore. It received Mr. Loh, Damon Evans, the athletic director, and Mr. Durkin one by one.

The meeting was intended to resolve a crisis that started with Mr. McNair’s death and snowballed after an ESPN article in August portrayed the program as one in which staff members humiliated and bullied players in a way that has fallen out of favor in big-time college football.

After that ESPN report, the university suspended two athletic trainers and reached an agreement for the resignation of the strength coach, Rick Court — who was depicted in the article as the ringleader of a “toxic culture.”

Mr. Durkin was hired after the university left the basketball-oriented Atlantic Coast Conference for the Big Ten, which could eventually net tens of millions of dollars more in revenue for Maryland. The ESPN report noted that some players had taken issue with Mr. Durkin’s intense style and the fact that Mr. Court was one of his first hires.

The university’s inquiry into the football program was formally released this week. But the board had it in hand last week as it met Mr. Loh, Mr. Durkin and Mr. Evans.

The report partly blamed Mr. Durkin, but it also partly absolved him, characterizing the first-time head coach — who was hired after the 2015 season, when he was just 37 — as overmatched in his new job. It also said he had not received sufficient support from the athletic department or the university, given Maryland’s lofty ambitions in its new conference.

“Mr. Durkin was hired under high-pressure circumstances and tasked with turning a struggling football program into a Big Ten contender, with less funding and fan support than other conference programs,” the report said.

After reading the report, the majority of the board advocated ending Mr. Loh’s tenure as president. Word of the board’s plans got back to Mr. Loh, who requested a chance to make his case.

When he spoke to the board last week, Mr. Loh cautioned that abruptly changing leadership would destabilize the university. He also argued that he could help carry out changes recommended in the report. Finally, he warned that retaining Mr. Durkin would send the campus into turmoil.

Mr. Durkin spoke later, and by several accounts was persuasive. He is an acolyte of two of college football’s premier coaches, Urban Meyer of Ohio State and Jim Harbaugh of Michigan. After he spoke to the board, it decided not to fire him.

By Monday, the board had decided that both Mr. Durkin and Mr. Evans would stay. But the board does not have the authority to hire or fire university personnel other than the president. So Mr. Loh, whom a majority still wanted to terminate, had to be the one to retain Mr. Durkin and Mr. Evans. Instead of immediately being dismissed, Mr. Loh was permitted to retire in June, at the end of the academic year.

On Wednesday, Mr. Loh had several meetings with campus department heads and deans, undergraduate student government leaders and the faculty senate’s executive committee. Mr. Durkin oversaw his first practice in nearly three months, though a clamor was growing on campus over his staying and Mr. Loh’s leaving.

Statements from deans and distinguished professors warned of what they characterized as inappropriate board interference. Students held a rally, while political leaders and even the chief of the university’s foundation, an important fund-raising arm, spoke out with disapproval.

When Governor Hogan — who appointed many regents, and, if the polls are correct, stands to win re-election and appoint more — joined in the opposition to Mr. Durkin’s staying, the situation seemed untenable.

Mr. Hogan was not privy to the regents’ deliberations, according to a spokeswoman. Benjamin Jealous, his Democratic opponent, had called on him to fire board members, though Mr. Hogan lacks the authority to directly do so in the absence of extreme misconduct.

But Mr. Loh had already planned his move. On Halloween evening, he announced that he was defying the board and firing Mr. Durkin.

“The chair of the Board of Regents has publicly acknowledged that I had previously raised serious concerns about Coach Durkin’s return,” Mr. Loh said, adding, “However, a departure is in the best interest of the university.”

The politics of the moment — campus anger, national opprobrium, the disdain of donors — seemed at once to compel and vindicate Mr. Loh’s decision.

As it turned out, Mr. Loh outlasted not only Mr. Durkin but also Mr. Brady, who resigned Thursday evening.”