Hundreds came together in anguish in synagogues and at gravesides yesterday in Pittsburgh to attend the services for some of those killed in the Tree of Life synagogue on Saturday.  In the afternoon, they came together again, in shivas to honor the dead and comfort the living, and, later by the thousands, in solemn marches of protest around the Squirrel Hill neighborhood where the attack took place.  The marchers were protesting the violence that took the lives of the innocents but they were also there to let President Trump that he was not welcome in their neighborhood in their hour of grief.   The New York Times reported:

“The presidential visit, welcomed by some in Pittsburgh, unwanted or vigorously opposed by many others, began with a motorcade into the city and a visit to the Tree of Life synagogue. Mr. Trump lit memorial candles in a vestibule near where the shooting unfolded, and placed stones and white roses from the White House outside, in commemoration of those killed in an attack by a gunman full of anti-Semitic rage shouting that Jews must die.

But if Mr. Trump’s visit was intended to bring healing, it instead laid bare the nation’s deep divisions. Many protesters in Pittsburgh had no doubt of what one called “the dotted line” between presidential rhetoric and violence, though some people in the city have pushed back on the idea that Mr. Trump had fomented the atmosphere of anger. As the president moved around Pittsburgh, a largely Democratic city, the signs of discord were apparent.

The protesters, some praying in Hebrew, others singing and chanting, moved around Squirrel Hill. Hoodie-wearing college students and Orthodox Jews with black hats and long beards walked alongside demonstrators carrying militant signs and middle-aged parents pushing strollers. Signs read “Words matter” and “President Hate is not welcome in our state.”

“President Donald Trump arrived in Pittsburgh to pay his respects and encountered hundreds of shouting, chanting protesters with signs such as “It’s your fault” and “Words matter,” a reference to allegations his bellicose language has emboldened bigots. Pennsylvania’s governor and the mayor of Pittsburgh declined to join him during the visit.

Earlier in the day, thousands of mourners jammed a synagogue, a Jewish community center and a third, undisclosed site for the first in a weeklong series of funerals for victims of the deadliest anti-Semitic attack in U.S. history.

Dr. Jerry Rabinowitz, Daniel Stein and Cecil and David Rosenthal were among 11 people killed in the shooting rampage at the Tree of Life synagogue Saturday. Robert Gregory Bowers, a 46-year-old truck driver who authorities say raged against Jews, was arrested on federal hate-crime charges that could bring the death penalty.

With Tree of Life still cordoned off as a crime scene, more than 1,000 people poured into Rodef Shalom, one of the city’s oldest and largest synagogues, to mourn the Rosenthal brothers, ages 59 and 54.

The two intellectually disabled men were “beautiful souls” who had “not an ounce of hate in them — something we’re terribly missing today,” Rabbi Jeffrey Myers, a survivor of the massacre, said at their funeral.

Myers, his voice quivering, told the Rosenthals’ parents and other family members: “The entire world is sharing its grief with you, so you don’t walk alone.”

The brothers were widely known as “the boys,” the Rosenthals’ sister, Diane Hirt, noted. “They were innocent like boys, not hardened like men,” she said.

She said Cecil — a gregarious man with a booming voice who was lightheartedly known as the mayor of Squirrel Hall and the “town crier” for the gossip he managed to gather — would have especially enjoyed the media attention this week, a thought that brought laughter from the congregation.

Rabinowitz’s funeral was held at the Jewish Community Center in the city’s Squirrel Hill section, the historic Jewish neighborhood where the rampage took place. Two police vehicles were posted at a side door and two at the main entrance.

A line stretched around the block as mourners — some in white medical coats, some wearing yarmulkes, black hats or head scarves — passed beneath the blue Romanesque arches into the brick building.

The 66-year-old Rabinowitz was a go-to doctor for HIV patients in the epidemic’s early and desperate days, a physician who always hugged his patients as they left his office.

“A lot of people are feeling really angry about this. A lot of rage built up inside about this, because of it being a hate crime. Don’t get me wrong; I do. But I’m so overwhelmed with sadness right now that I can’t even be angry right now,” said Robin Faulkner, whose family had seen Rabinowitz for 30 years and counted him as a dear friend. “It’s just such a loss. Just tragic.”

A private funeral was also held for Stein, the 71-year-old men’s club president at Tree of Life.

The other victims’ funerals have been scheduled through Friday.

Trump and first lady Melania Trump landed in Pittsburgh after the day’s services and lit candles at the Tree of Life for the victims. Outside, they laid white roses as well as stones for each of the dead, a Jewish burial tradition. The president and first lady later went to a hospital to visit with survivors.

They were joined by Trump’s daughter Ivanka and her husband, Jared Kushner, as well as Myers, the Tree of Life rabbi, and Israeli Ambassador Ron Dermer.

Hundreds of protesters gathered near the synagogue and the hospital.

“He didn’t pull the trigger, but his verbiage and actions don’t help,” said Squirrel Hill resident Paul Carberry, 55, wearing anti-Trump patches on his hat and jacket.

Democratic Mayor Bill Peduto had asked Trump not to come while the city was burying its dead. He and Gov. Tom Wolf, a fellow Democrat, said they would skip the president’s visit.

“Community leaders expressed to the governor that they did not feel it was appropriate for Trump to come, so the governor made a decision not to join him on his visit out of respect for the families and the community,” said Beth Melena, Wolf’s campaign spokeswoman.”

May the victims rest in peace!  May the Squirrel Hill neighborhood heal!  And may President Trump come to realize the violence and discord he perpetuates in our country! 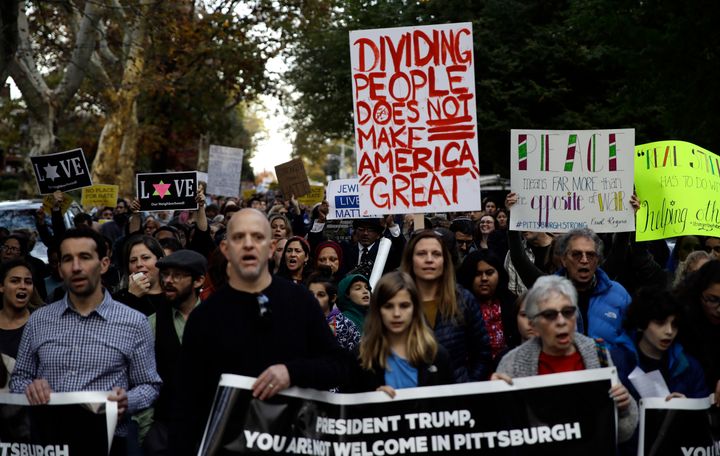