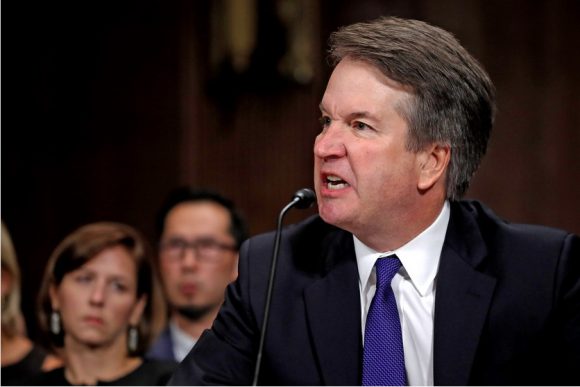 Maureen Dowd comments on the Senate Supreme Court nomination hearings last Thursday in her column today.  She comments on the brutality of the hearings and compares them to  the Clarence Thomas/Anita Hill testimonies in 1991. The column (below in its entirety) says it all.

Brett Kavanaugh faces his moment of truth in a town that doesn’t care about truth.

WASHINGTON — I never thought it could be as brutal.

The same Republican gargoyles who once tore Anita Hill limb from limb knew they had to tread gingerly, with women at the barricades. They outsourced the estrogen to “a female assistant,” as Mitch McConnell called Maricopa County sex-crimes prosecutor Rachel Mitchell.

And race, which scorched the Hill-Thomas hearings, was not a part of this excruciating face-off. Christine Blasey Ford and Brett Kavanaugh were summoning memories of summer days in the very white, very cosseted country club, prep school world of suburban Washington.

But, shockingly, it was more brutal.

Not only because the sexual transgression Blasey was describing was more savage. But also because Kavanaugh simply adapted Clarence Thomas’s playbook of raging against the machine. Thomas’s fury was white-hot. Kavanaugh’s, weepy. But the pitch was the same.

“This is a circus,’’ Kavanaugh seethed on Thursday.

Kavanaugh echoed Thomas’s martyrdom, claiming he was being “destroyed” by partisans conspiring to dig up dirt. He charged that Democrats were conducting a “grotesque and coordinated character assassination” because of their anger about President Trump’s ascent and their desire for revenge after his own seamy work helping Ken Starr in his pervy pursuit of Bill Clinton.

It was a cri de coeur custom-made for the age of Trump — and custom-designed to please Trump himself: entitled white men acting like the new minority, howling about things that are being taken away from them, aggrieved at anything that diminishes them or saps their power.

As The Atlantic noted, Kavanaugh brandished Yale as “a magic wand, something that could be waved to dispel questions of his conduct.”

Thomas prevailed over Hill because of that lava flow of anger. The senators were frozen, Pompeii-style, as he cried racism to snatch the mantle of victim.

Hill’s aloof, dispassionate description of Thomas’s harassment, and her preternaturally cool reaction to all the lurid slanders hurled at her, left the senators skeptical that she was telling the truth; shouldn’t a wronged woman show more emotion?

Six years later, when Hill wrote a book, the law professor explained that, as the youngest of 13 from a rural Oklahoma family, she had had years of practice in “being impervious to and immobile in the face of hurt.”

Hill’s mother was left to express the emotion that her daughter reined in; when the Senate confirmed Thomas to the Supreme Court, the mother snapped, “The dirty rascals.”

The Palo Alto psychology professor laced her testimony with scientific terms like “sequelae,” “norepinephrine” and “hippocampus.” But it was easy to visualize the 15-year-old in the 51-year-old with the girlish voice and guileless air as she repeatedly pushed a blond strand of hair out of her face, smiled nervously and tried oh so hard to please everyone. Her emotions, including panic, seemed close to the surface.

The pentimento of the teenage Blasey made her seem achingly vulnerable. Like Hill, she had a purity to her manner and story that was luminous, an impressive contrast to all the dark obfuscations, self-serving political maneuvering and petty deceptions around her.

Kavanaugh had seemed to dissemble a few times in his earlier testimony, including about his role in the case of the stolen Democratic documents in the Bush years and his role in the N.S.A.’s warrantless wiretapping program.

And he appeared to do so again on Thursday, pretending the “Renate alumnius” in the Georgetown Prep yearbook was an affectionate term for his “great friend,” who called the innuendo “horrible, hurtful and simply untrue.” He said the vomiting that gained him entry to the “Beach Week Ralph Club” was about spicy food more than drinking. Right. Again treating the senators like idiots, he provided innocent meanings for clearly salacious terms used like “Devil’s Triangle.’’

The nominee whom Ted Cruz defended as “a boring Boy Scout” became a sneering portrait of privilege denied.

When Amy Klobuchar, citing her father’s alcoholism, asked if Kavanaugh had ever blacked out from drinking, he snapped back, “I don’t know — have you?’’

Jeff Flake was so unnerved by the blast of opposition to his decision to vote for Kavanaugh that he led a scheme to get a week’s delay to have the F.B.I. investigate.

So we will finally drag Mark Judge, the man named by Blasey as the third person in the room that night, out of his beachfront hide-out. If the Republicans wanted to discern the character of who they’re putting on the court, rather than simply solidifying the conservative majority, they would already have subpoenaed Judge and anyone else who could provide clarity.

The hope that the F.B.I. will save the day may be misplaced. In the case of Anita Hill, agents were deployed by Republicans to help smear her.

Even if Kavanaugh is confirmed, he already seems warped by this experience — just like Thomas was, when he went onto the bench as a very angry and bitter man.

But at least we have a few more days to pretend to look for the truth.