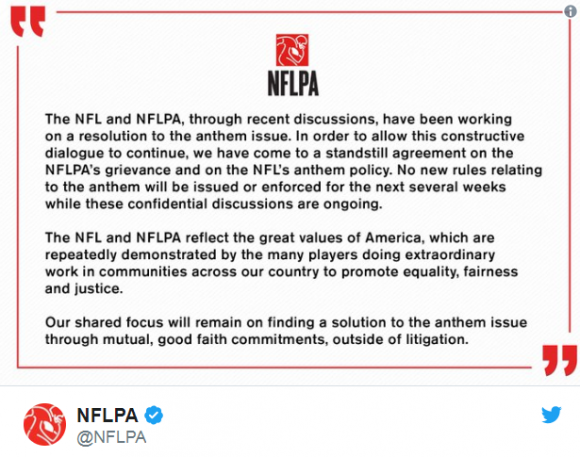 In response, New York Giants co-owner Steve Tisch said he will not punish his players for any anthem displays of protest and hopes that President Donald Trump will focus on other issues, he told The Hollywood Reporter:

“Hopefully he’ll have much more going on that he’s going have to deal with and should deal with and must deal with than worrying about what NFL players do,” Tisch told The Hollywood Reporter Tuesday night at the premiere of The Equalizer 2. “He has no understanding of why they take a knee or why they’re protesting. When the new season starts, I hope his priorities are not criticizing the NFL and telling owners what to do and what not to do.”

Tisch added a statement of support for his players:

His comments come during a week when issues surrounding the anthem have resurfaced in part due to a joint statement released by the NFL and NFPA Thursday. That statement included that there will be no new rules issued relating to the national anthem, and that none will be enforced over the “next several weeks” while they continue to have “confidential discussions.”

His comments also come a day after the Associated Press obtained an internal document saying that the Miami Dolphins could suspend players up to four games for kneeling.

NFL owners voted in May on a new anthem policy for the upcoming season, and the NFLPA has since filed an official grievance. The policy gives players the option of staying in the locker room during the national anthem if they don’t want to stand, and players who choose to remain on field will be required to stand.

But if a player or team employee is on the field during the anthem and chooses not to stand, that player’s franchise will be fined. Additionally, players and employees who choose to attend the anthem ceremonies but do not stand will also be eligible for a fine by their franchise, if the team chooses to levy one.

Tisch isn’t the only team official to say that he won’t punish players: New York Jets chairman Christopher Johnson said shortly after the new rule passed that he will pay any fines incurred by players who kneel.

Congratulations to Mr. Tisch, the NFl, and the NFLPA for trying to come to a mutually agreeable solution.