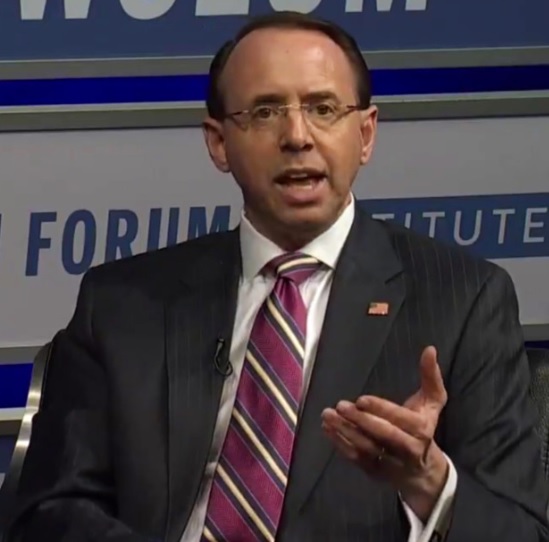 In response to the Congressional House Freedom Caucus supposed preparation of articles of impeachment against him, Deputy Attorney General Rod Rosenstein fired back:

“They can’t even resist leaking their own drafts,” Rosenstein said yesterday in response to a question from CNN reporter Laura Jarrett.

He added: “The Department of Justice is not going to be extorted.”

Rosenstein is responsible for overseeing the special counsel Robert Mueller’s probe into Russian meddling in the 2016 election. Rosenstein appointed Mueller to the position. His authority over the investigation has drawn the ire both publicly and privately of President Donald Trump and his Republican allies on Capitol Hill.

The ultra-conservative House Freedom Caucus who ally themselves with Trump have drafted articles of impeachment against Rosenstein as a last resort, according to The Washington Post. The move comes in contrast to the approach of GOP congressional leaders, who believe that Rosenstein and Mueller should be allowed to complete the investigation.

Trump has publicly and privately considered firing Rosenstein for not limiting the scope of Mueller’s authority in the probe. Rosenstein has clashed with House Freedom Caucus members over requests for documents regarding the Russia investigation.

Congratulations to Mr. Rosenstein for not backing off from the Freedom Caucus bullies.  When this entire episode of the Mueller investigation of Donald Trump ends, Rosenstein will likely emerge as a “John Dean” figure for those of us who remember Richard Nixon’s impeachment.