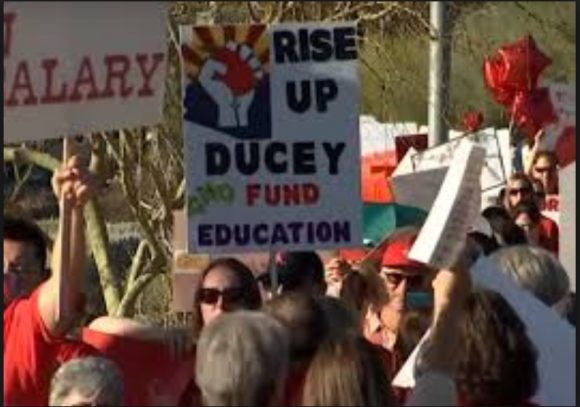 Teachers in Arizona voted on Thursday night in favor of a statewide walkout in protest over low pay and school funding.  Their vote continues a movement that is sweeping across the United States that started in West Virginia and continued into Oklahoma and Kentucky. As reported by the New York Times:

“The spread of the protests to Arizona from West Virginia, Oklahoma and Kentucky, all Republican-dominated states with weak public sector unions, signaled the depth of frustration from teachers and parents over years of education budget cuts.

The movement first arose in West Virginia, where teachers walked off the job in February, winning a $2,000 raise. In Oklahoma, the threat of a walkout garnered a $6,000 raise for teachers, but they still picketed the Capitol for nine days, calling for additional school funding that mostly did not come. In Kentucky, teachers have rallied outside the State Capitol to protest changes to their pension plans and to demand more money for schools.

“It’s clear that our educators are inspired by what they’ve seen in West Virginia and Oklahoma and Kentucky,” said Joe Thomas, president of the Arizona Education Association, the state’s largest teachers’ union. “They see educators rising up and lifting their voices for their students, and doing so in a way that can’t be ignored.”

The vote in Arizona followed weeks of protest across the state and promises from the governor to raise salaries. The Arizona Education Association and Arizona Educators United, a group of teachers who organized independently on Facebook, said that 78 percent of the teachers and school workers who cast ballots supported a walkout.

The groups said the walkout would take place on April 26 if legislators and the governor did not meet their demands, not only for a raise for teachers but also one for school support staff. They also called for an end to tax cuts until Arizona’s per-pupil spending reaches the national average.

Unlike West Virginia and Oklahoma, Arizona has never before had a statewide teacher walkout, and has experienced only a handful of districtwide strikes over the past four decades.

The state has cut approximately $1 billion from schools since the 2008 recession, while also cutting taxes. It spent under $7,500 per pupil annually in 2015, the last year for which census data was available; only Utah and Idaho spent less.

As in the other states where teachers have picketed, many districts in Arizona are facing teacher shortages in subjects like math, science and special education, with principals reporting that staff members are moving to deeper-pocketed states to earn up to $20,000 more per year, or to work in better-funded classrooms.

Noah Karvelis, an elementary school music teacher and the founder of Arizona Educators United, said he was sympathetic to the disruption that widespread school closings would cause students and parents. But, he said, that should not forestall a walkout.

“If we maintain the status quo, that is way worse than missing a couple of days of school,” Mr. Karvelis said at a news conference outside the union headquarters in Phoenix. “The biggest disservice any of us could do for our students right now is to not act in this moment.”

Across Arizona, tens of thousands of teachers, parents and students, clad in red, participated in protests outside schools on April 11. Gov. Doug Ducey said he was “impressed” by the movement, which calls itself #RedForEd. He promised to provide teachers with a 20 percent raise by 2020, and to restore school budgets to pre-Recession levels over the next five years. He said he could do so without raising taxes, because the state’s economy is improving and existing state programs could be cut.

But many teachers rejected that plan, or said they distrusted Mr. Ducey, a first-term Republican.

“You don’t rob Peter to feed Paul,” said Kassandra Dominguez, who teaches first grade in the Pendergast school district, near Phoenix. “That’s so wrong, and I wouldn’t want that money.”

Alternate proposals for raising school budgets include increasing an education sales tax from six-tenths of a cent to one cent, or closing corporate tax loopholes.

The average teacher salary in Arizona is about $47,000 per year, according to the National Center for Education Statistics. But starting salaries are much lower, and many teachers leading the protest movement are in their 20s and 30s.

Ms. Dominguez, 27, earns $38,250 per year, and says that because of low education budgets, she has had to pay out of pocket, or raise money from private donors, to buy her students science supplies, chairs and snacks. She voted in favor of a walkout. Her district had lost a total of $1.6 million over the past five years because of budget cuts, according to administrators, and the school board had come out in favor of the #RedForEd movement.

In San Tan Valley, an exurban area an hour southeast of Phoenix, Mary Stavely, an elementary schoolteacher, said she had also voted in favor of a walkout. Ms. Stavely, 34, earns $36,800. Thirteen of 38 teachers at her school, Circle Cross Ranch K-8, are planning to resign at the end of this academic year, she said, because of factors like low pay and a lack of rental housing in the area.

“It directly affects students” when teacher turnover is high, Ms. Stavely said, because children “lose morale and the connections that were made” with caring adults. Ms. Stavely, a single mother, is currently living with her parents, and said she has considered looking for a higher-paying job. Still, she said she had spent her spring break going door to door to recruit parents to enroll their children at her public school. Arizona has aggressively expanded charter schools and private school vouchers in recent years, leading to enrollment declines — and potential budget cuts — for some traditional schools.

More than 57,000 educators filled out a ballot in the Arizona walkout vote. There are approximately 90,000 certified teachers in the state, but only 20,000 members of the Arizona Education Association, the union. As in the other red states that have had recent teacher protests, union membership is optional for Arizona educators, and labor organizing is new for many of them.”

Power to the teachers in Arizona – #RedForEd! 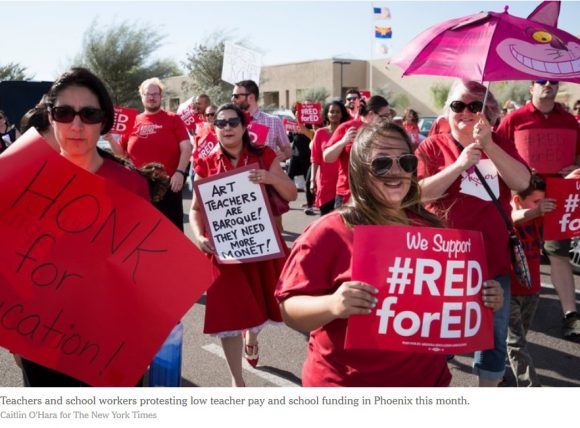