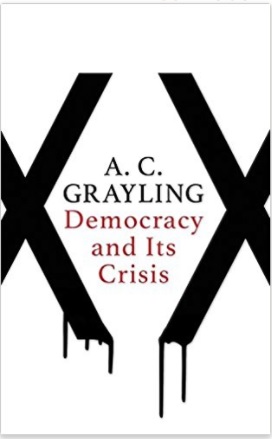 If you are at all concerned about how our American democracy has gone awry in the past two years, I highly recommend reading A.C. Grayling’s Democracy and its Crisis.   Grayling, the British philosopher and master at the New College of the Humanities in London, knows his topic well and takes the reader on a journey of the evolution of democracy from its earliest beginnings to the present.  If you are not interested in what the likes of Aristotle, John Stuart Mill, Alexis de Tocqueville and Benjamin Constant have to say about democracy, you can skip the first half of the book.  However, the second half will make you concerned about where our democracy is heading.  Here is an excerpt from the New York Times Book Review:

“A. C. Grayling, a British philosopher and critic whose subjects range from 17th-century epistemology to 20th-century war crimes, has come to tell us what he knows: that at one time we admired and understood representative democracy, and not without reason, but that in the era of Donald Trump and Brexit, democracy has been “made to fail.” Why has this happened? Because of insufficient checks on the power of political and economic elites, a failure in the civic education required of an informed populace, and the ideological distortions created through the lobbying efforts of special interests.

Representative democracy ticks more of the boxes citizens want from their government than any other system we’ve tried to design. But when we forget this, rancorous populism and plebiscitary politics take hold, and we need to be given an old-fashioned history lesson to warn of the dangers ahead. As Grayling reminds us, democracy, understood as the rule of the majority, has never been sufficient in itself. Plato, Aristotle and Machiavelli all knew that more was needed, whether that meant enshrining constitutional rules to avoid the arbitrary exercise of power, imposing standards of behavior on elected officials or supporting a healthy ambivalence toward rulers by the ruled.

From these classical debates, increasingly complex defenses of representative democracy emerged in England, America and France. Leading thinkers in the age of revolutions tried to reconcile the need for modern republics of great size and diversity with the idea of popular sovereignty — without succumbing to traditional sources of division and faction, most notably brought about by inequalities of property and wealth. What these representative structures never resolved was the question of how much economic inequality was necessary to make the system work and how much might flip it into oligarchy, threatening its very foundations.”

After reviewing the presidential election in the United States and the Brexit vote in the UK , Grayling paraphrases George Mobiot in his conclusion that the capture of the democratic political process by a highly partisan group means that it frees itself, its supporters, and funders, from the controls of the democratic order and the interests of both minorities and the overall collective.

“Subverted democracy is no democracy;  a political order which is meant to translate democratic preferences into sound government, but where the preferences have been manipulated and the government is operated in the interests of only one part of the populace, is not a democratic political order.  This, as the body of this book argues, is the situation in the United States and the UK today.”