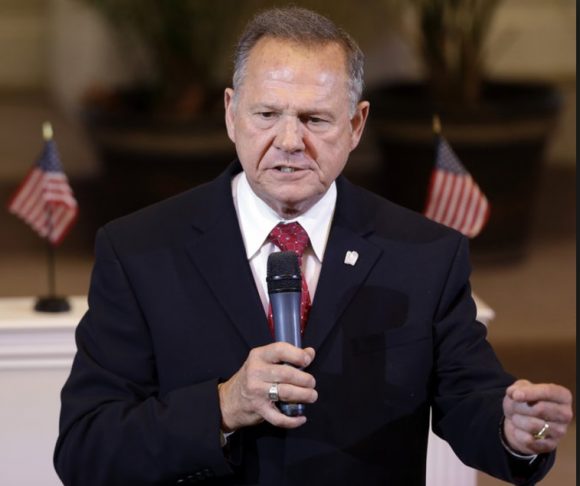 The main political story today is that Roy S. Moore defeated Senator Luther Strange yesterday in a special primary runoff election in Alabama for the U.S. Senate.   The good news is that President Trump and establishment Republicans like Mitch McConnell, worked feverishly the last two weeks to support Strange.  The bad news is that Moore is a very right of center candidate who strongly opposes same-sex marriage and is prone to making inflammatory remarks about race.  As reported in the New York Times:

The outcome in the closely watched Senate race dealt a humbling blow to President Trump and other party leaders days after the president pleaded with voters in the state to back Mr. Strange.

Propelled by the stalwart support of his fellow evangelical Christians, Mr. Moore survived an advertising onslaught of more than $10 million financed by allies of Senator Mitch McConnell, the majority leader. His victory demonstrated in stark terms the limits of Mr. Trump’s clout.

Taking the stage after a solo rendition of “How Great Thou Art,” an exultant Mr. Moore said he had “never prayed to win this campaign,” only putting his political fate “in the hands of the Almighty.”

“Together, we can make America great,” he said, borrowing Mr. Trump’s slogan and adding, “Don’t let anybody in the press think that because he supported my opponent that I do not support him.”

Mr. Trump had tweeted his support for Mr. Strange several times in recent days, but tweets appeared to be deleted on Tuesday night. Mr. Trump offered congratulations to Mr. Moore in a tweet. “Luther Strange started way back & ran a good race. Roy, WIN in Dec!” he wrote.

In a race that began as something of a political afterthought and ended up showcasing the right’s enduring divisions, the victory by Mr. Moore, one of the most tenacious figures in Alabama politics, will likely embolden other anti-establishment conservatives to challenge incumbent Republicans in next year’s midterm elections.

And more immediately, the party will be forced to wrestle with how to prop up an often-inflammatory candidate given to provocative remarks on same-sex marriage and race — all to protect a seat in a deep-red state. Mr. Moore’s incendiary rhetoric will also oblige others in the party to answer for his comments, perhaps for years to come, at a time when many Republicans would just as soon move on from the debate over gay rights.”

We shall see how Mr. Moore does in the Senate election against the Democratic nominee, Doug Jones, a former federal prosecutor, on December 12th.