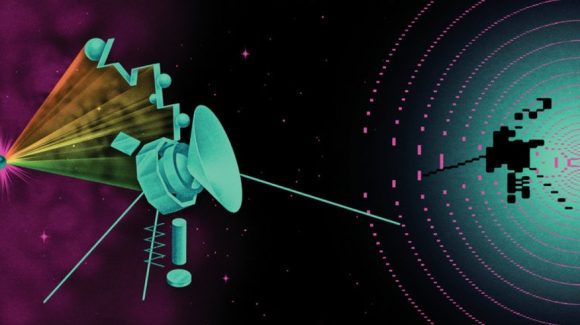 This past Tuesday was the 40th anniversary of the launch of Voyager 1.  Lawrence M. Krauss, the director of the Origins Project at Arizona State University, had an op-ed piece in the New York Times reflecting on its journey and that of its companion probe, Voyager II, and pondering  just how far humanity has traveled in just a few decades.  Here is an excerpt:

“In 2012, Voyager 1 left the sheltered cocoon we call the heliosphere, a bubble in space in which the pressure from the sun’s wind of particles and its magnetic field overcome the outside pressure from the rarefied gas that permeates the rest of our galaxy. It became the first object built by humans to depart our solar system, to wander through dark interstellar space. (Voyager 2, on a different trajectory, remains within the heliosphere.)

One way or another, humanity’s future is in the cosmos. Perhaps spacecraft will one day manage to carry humans to the stars, or at least robots with instructions on how to create humans.

Or, humanity may never expand beyond Earth. In two billion years, the sun’s brightness will increase by 15 percent, making our home similar to Venus today. A runaway greenhouse effect will produce surface temperatures in excess of 700 degrees Fahrenheit. Following that, in five billion years, the sun will exhaust its hydrogen fuel and its outer surface will expand as it becomes a red giant, eventually encompassing Earth within its outer layers.

As this happens, our atmosphere will be blown out into the cosmos, and the atoms that now make up our bodies may be dispersed into the interstellar medium, perhaps to seed some future planet around some star that has yet to be born.

For humans, these two futures are wildly divergent. But for our atoms, they are largely the same. Many will end up among the stars, whether they travel outward into the cosmos in spacecraft or are propelled by a massive atmospheric shock wave.

All the while, our two Voyager spacecraft are likely to continue their lonely journeys among the stars. Humanity may perish, but somewhere in our galaxy will be evidence that we once existed.

The Voyagers carry with them a much-heralded snapshot in time. The famous and romantic Golden Record, developed by Carl Sagan and his colleagues, with music and images from the world as it was in 1977, might be discovered one day by distant aliens who find the crafts wandering in their vicinity of the galaxy.

…Think of how much our understanding of the universe has changed since 1977. We now know that all the visible stars and galaxies and everything we could then see with our telescopes are actually merely 1 percent of what is actually there. The known universe in 1977 was but the visible part of a cosmic iceberg, the bulk of which is made up of material having no resemblance to the matter that makes us up. Even more inexplicable is the fact that 70 percent of the total energy of the cosmos resides mysteriously in empty space, which is causing the expansion of our universe to speed up, not slow down.

Even in our own solar system, we expected the moons of Jupiter and Saturn were merely dead lumps of rock or frozen snowballs, whereas we now understand that several have warm oceans underneath a coating of ice — ideal potential breeding grounds for what may be independent forms of life.

We also had no direct evidence that any planets existed around other stars. We have now discovered thousands of them, some of which may be habitable, including one around our nearest neighbor, Proxima Centauri. And we know that our solar system is by no means typical.

We have discovered massive black holes at the center of many galaxies and have observed the convulsions of space as black holes collide and merge. On smaller scales, we have unraveled the nature of three of the four fundamental forces of the universe and discovered the Higgs particle, validating our picture of the origin of mass in the cosmos.

…Where will humanity be in another 40 years, as these spacecraft continue their travels, though still closer to their home star than any other? Will we continue our own voyage of discovery? Will we meet the global challenges we face or succumb to them? The future for the Voyager spacecraft may already be written. Our own future remains in our hands.”

Thank you Dr. Krauss for reminding us of some big questions!