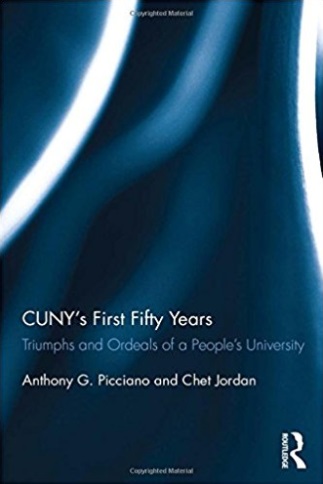 A new book about the City University of New York entitled, CUNY’s First Fifty Years:  Triumphs and Ordeals of a People’s University, authored by yours truly and Chet Jordan, has just been published. Chet is on the faculty of Guttman Community College, and is a doctoral student at the CUNY Graduate Center conducting research on student experiences at CUNY community colleges.  The idea for the book first came to me in 2012 when I taught a seminar commemorating the 50th Anniversary of the founding of CUNY.  I have since taught several seminars on higher education drawing frequently on CUNY’s history for examples.  The material from these seminars helped form the foundation for the first half of this book while Chet’s research provided important insights for the second half.  Co-authoring this book represents a unique collaboration between two colleagues who bring very different perspectives about and associations with CUNY to the table including the old and the new; the senior versus the community college experience; as well as different perspectives regarding CUNY administration, faculty, and students.  It needs to be emphasized that this is not an all-encompassing history of CUNY.  Such a book would require volumes.  Instead, it is a character sketch of our great institution, one that has not been done in the recent past.

The purpose of the book, more specifically, is to present the story of the City University of New York, established officially in 1961, as it navigates through a continual series of ups and downs as do other public university systems in the country. From its inception to the present, CUNY has served as a pawn in New York politics with mayors, governors, legislators, and community groups using it to further social, political and economic objectives. Chancellors, presidents, and governing boards have balanced these outside pressures with the education goals and objectives of their colleges and university as best they could.  Our book depicts the interaction of these political and educational influences, dimensions, and entwinements that have come to characterize much of the history of the City University of New York.

If you are at all interested in the “people’s university” that has given so many the opportunity for a higher education, you might find this book a good read.  Below is an excerpt.

In May 1965, freshmen orientation was held in the auditorium of Gillet Hall at Hunter College in the Bronx.  Gillet Hall was one of four Gothic-style buildings that framed a campus lined with old oak trees, green spaces, playing fields, and red-clay tennis courts.  The orientation was presided over by several deans and administrators, faculty and student government leaders, all of whom were white.  The incoming class was for the most part also white.  The women wore skirts and blouses while many of the men wore “Joe college” sweaters with a stripe or two on the arms.  Speaker after speaker reminded the audience how fortunate they were to be admitted to the College.  The audience, in fact, did represent a select group of students who had to have graduated in the top ten percent of their high school class in order to be admitted to the tuition-free College.  Similar scenarios were being played out at City College, Brooklyn College, Queens College, and Hunter College downtown all of which comprised the senior colleges of the City University of New York (CUNY).

The Dean of Academic Standards at the orientation warned the incoming students that they would have to work hard to maintain their academic standing if they wanted to graduate in four years.  She also invoked the traditional scare to look to your right and to look to your left and that one of you would not be here one year from now.  While it was meant as a tactic, the fact was that many of these students would likely fail out in their first year, such was the rigor of the academic program in the pre-grade inflation days of American higher education.  This was especially the case at CUNY colleges where tuition did not provide the funding for the academic programs and where there was no reason to keep underachieving students enrolled. To the contrary, faculty maintained very high grading standards and were not at all timid about giving students Cs, Ds, and Fs.

The speakers described the academic program spending time clarifying the general education requirements of sixty-plus credits.  They also commented that, in their sophomore year, students should start thinking about their majors, which they would have to declare no later than the first semester of their junior year.  After the formal part of the orientation ended, cookies, coffee, tea and fruit juice were provided while several musicians played popular tunes of the time.  There were one or two Bob Dylan songs that portended that the times were a-changing. Interestingly, no one in the audience, not the administrators, faculty, or students foresaw the changes that would be coming.  Everything that was being described by the speakers would be completely repainted if not turned upside down in the near future.  By 1970, open admissions would replace selective admissions.  By 1975, CUNY’s free tuition policy would be eliminated. By 1979, the entire governing structure would be recast.