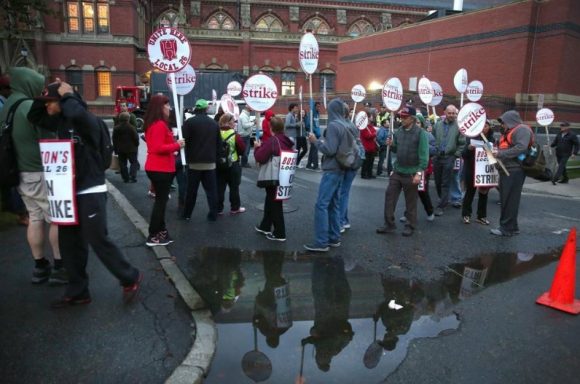 Dining-hall workers at Harvard University have been on strike for more than two weeks.  It has become a bit of an embarrassment that the richest university in the world is having a wage dispute with some of its lowest-paid workers.  What might have been a simple labor dispute at another institution has become more contentious — and drawn more attention — thanks to Harvard’s reputation and enormous wealth.   Here is an excerpt from an article in The Chronicle of Higher Education:

“The university faces a test of wills, and a problem of appearances: How does the richest university in the world negotiate with some of its lowest-paid workers?

Large strikes against colleges by nonacademic employees are rare but could become more common as the national discussion of inequality grows, and a new generation of activists, both workers and students, builds momentum on the issue.

Negotiations over a new employment contract began in May and continued over the summer. About 750 workers represented by Unite Here Local 26 went on strike on October 5 after the university rejected their demands for pay increases and stuck with plans to raise employee contributions for healthcare benefits. Harvard says that, at an average of nearly $22 per hour, its pay for dining-hall workers is among the best for such jobs in the region, and that skyrocketing health-care costs mean that some changes in its health benefits, and in worker contributions to those benefits, are needed.The university has proposed various steps, including delaying the increases until 2019, to mitigate any hardship caused by the rise in costs.

Strikers are walking picket lines at the university, and 11 were arrested for blocking traffic during a protest last week. Meanwhile, the university has closed six of its 14 dining halls. The remaining facilities are staffed in part with temporary workers. The university recently issued each student $25 worth of “Crimson Cash” to use at area restaurants in order to offer more “flexibility” to diners.

Many in the university community back the striking workers. More than 3,000 students signed a petition supporting the strike, according to Ted Waechter, a junior and a member of the Harvard Student Labor Action Movement, a student-activist group. About 400 students walked out of class in protest on Monday to attend a rally in support of the strike, he adds. Some alumni have signed a pledge not to donate to their alma mater and to instead divert any giving to the strike fund.

Sympathy for the workers may be heightened by Harvard’s status, says Ronald G. Ehrenberg, a professor of industrial and labor relations and economics at Cornell University and director of its Higher Education Research Institute. “When you are one of the richest universities in the world, there’s a lot of pressure on you to treat employees well,” he says, especially since some classes of employees, such as professors, are treated “very well.” Assistant professors at Harvard made an average of $114,777 a year in 2014, compared with assistant professors at all four-year private colleges, who made an average of $65,851 that year, according to data supplied to The Chronicle.

Harvard says that it treats its dining-hall workers well. Its hourly pay exceeds both the City of Cambridge’s “living wage” of $15.04 and the average wages paid to other food-service workers organized by Unite Here in the region. It offers paid vacation and retirement benefits, even to some part-time workers. The university’s most-recent offer to the striking workers includes a raise in average pay to more than $24 an hour by the end of a four-year contract.

While Harvard’s offer to the union does raise employees’ contributions for health care, the university hasn’t increased the cost of benefits to dining-hall workers since 2008. Given the huge cost increases for health care that have been partially passed on to employees in virtually all industries over the past several years, that’s “pretty extraordinary,” says Andy Brantley, president of the College and University Professional Association for Human Resources.”

Come on Harvard – do the right thing and settle this!