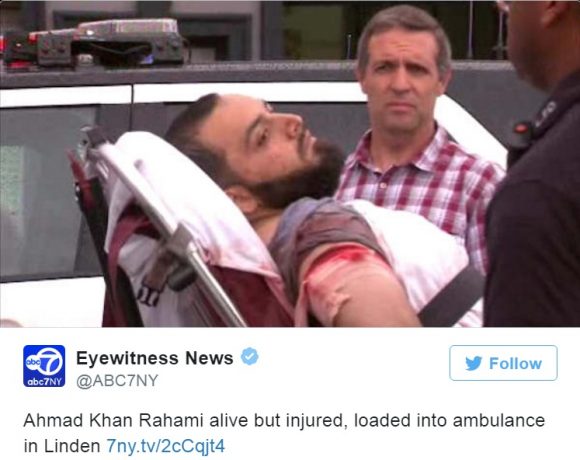 Congratulations are surely in order for the quick work of identifying and apprehending Ahmad Rahami, the suspect responsible for the bombings on Saturday night in Chelsea (Manhattan) and in New Jersey.  As reported by NBC News:

“The desperate search for a 28-year-old man wanted in connection with a series of blasts that terrorized New York and New Jersey over the last three days ended Monday in a gun battle with police officers.

And Ahmad Rahami on Monday evening was charged with charged with five counts of attempted murder of a law enforcement officer according to the Union County, New Jersey, prosecutor.

He was taken into custody earlier after he was shot in the leg during the 10:30 a.m. confrontation in Linden, New Jersey, law enforcement sources said.

Rahami managed to shoot one police officer in the hand and another in the bullet proof vest before he was apprehended, they said.

The injuries sustained by Rahami, who was being treated at University Hospital in Newark, and the officers did not appear to be life-threatening, officials said.

“When I was at the scene, initially, he was conscious and awake,” Capt. James Sarnicki of the Linden Police Department said of the suspect.

Rahami was captured after police got a call about a man sleeping in the doorway of a local bar, Sarnicki said.

When police arrived, one of the officers “tried to rouse him,” Sarnicki said. “The gentleman on the ground picked up his head, and the officer saw that he had a beard and resembled the wanted person from the poster … from the bombings.”

After the officer ordered Rahami to show his hands, the suspect “pulled out a handgun and fired one shot at the officer, striking him in the abdomen,” Sarnicki said. “Fortunately, the officer had a bullet-proof vest on.”

A local business owner told NBC News he heard what he thought at first were fireworks.

“But then we took a peek and there were cops firing and the guy went down in front of the building,” said the owner, who declined to give his name.

Meanwhile, President Obama reassured a nervous nation that law enforcement was on the case.

“Moments like this, I think it’s important to remember what terrorists and violent extremists are trying to do,” said Obama. “They are trying to hurt innocent people and create fear in all of us, to disrupt the way we live.”

Obama also praised New Yorkers and New Jersey residents after their states were once again targeted by terror.

“Folks around here, they don’t get scared,” he said. “They’re tough. they’re resilient. They go about their business every single day.”

Later, Obama told reporters he had spoken with — and thanked — the wounded Linden officers.

“They are going to be fine, sustained modest injuries, in good spirits,” he said. “Just one more reminder of the skill and sacrifice of law enforcement officers.”

Rahami was born in Afghanistan and his family was granted asylum in the U.S. in 2011, a senior U.S. intelligence official told NBC News. His father, Mohammad, said he had “no idea” his son was allegedly plotting a bombing campaign.”