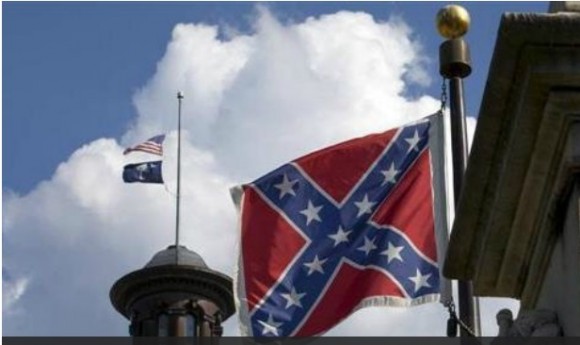 South Carolina’s Governor Nikki Haley has ordered the removal of the Confederate flag from the state capitol. The flag has been used by hate groups as a symbol for their bigotry and racism. As reported in the Associated Press:

“The announcement came after state lawmakers met urgently with each other and the governor. The head of the Republican National Committee has also called for its removal.

“Moving South Carolina forward from this terrible tragedy requires a swift resolution of this issue,” he said earlier in the day.

A growing number of religious and political leaders said they would push for the flag’s removal Tuesday during a rally in the capitol. The White House said President Barack Obama respects the state of South Carolina’s authority to decide the issue, but believes the flag belongs in a museum.

“The flag got appropriated by hate groups. We can’t put it in a public place where it can give any oxygen to hate-filled people,” said Charleston Mayor Joseph P. Riley Jr., a Democrat.

But the conservative politicians who have led South Carolina for a quarter-century have rebuffed many previous calls to remove the flag.

The last governor to take this political risk, Republican David Beasley, was hounded out of office in 1998 by the Sons of Confederate Veterans, and they made sure his political career was over thereafter. Their influence doomed Beasley’s front-runner campaign for U.S. Senate, a seat later won by Republican Jim DeMint.

The group announced Monday that it will vigorously fight any effort to remove the flag now.”

A good move on the part of Governor Haley to help South Carolina heal!