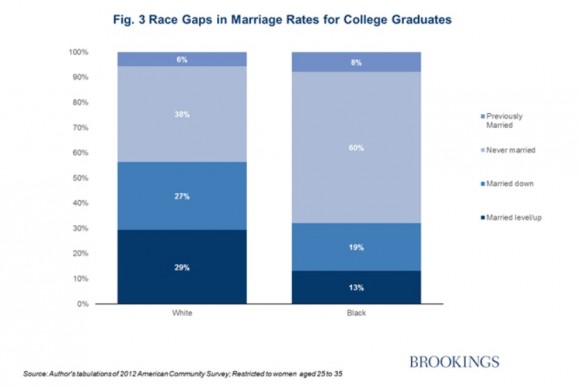 The Brookings Institution issued a report last week commenting on the marriage status of college-educated individuals.  It refers to  “assortative mating” or  people’s tendency to choose spouses with similar educational attainment. Rising numbers of college-educated women play a key role in this change. It is much easier for college graduates to find and marry each other when there are more equal numbers of each gender within an educational bracket.  The report opens by referring to a controversial commencement address at Princeton University in 2013:

“A media storm erupted in the Spring of 2013 when a Princeton alum, Susan A. Patton, president of the class of ‘77, offered the following advice to female students: “Here’s what nobody is telling you: Find a husband on campus before you graduate.” Writing in The Daily Princetonian, Patton went on: “You will never again be surrounded by this concentration of men who are worthy of you.”

Patton was dubbed a busybody, an elitist, and an anti-feminist. But while the idea of finding a spouse during college was outdated, her basic advice to marry a man “worthy of you” seems to be one most college graduate women were already heeding.”

The report then focuses on:

“…a growing “marriage gap” in the United States. Marriage rates among the non-college educated population have fallen sharply in the last few decades, and sharpest of all in the black population.

Black-white gaps in marriage rates reflect different levels of education by race, but there is an important gender gap too. Young white women — aged between 25 and 35 — are the most likely to have at least a BA (37%), followed by white men (29%), black women (23%) and black men (16%), according to our analysis of the ACS. We focus on the 25 to 35 year-old age cohort because these are the years during which most women, particularly college graduates, enter into their first marriage.”

The report goes on to compare marriage based on race, gender, and education attainment.  The most startling finding was:

“Marriage rates are lower among black women compared to white women, even among those with a college education. The proportion of black college graduates aged 25 to 35 who have never married is 60 percent, compared to 38 percent for white college-educated women (see graph above).  By definition, the black female college graduates who do not marry are not assortatively mating, since they are not mating — defined as marrying — at all. This helps to explain why white women with college degrees are more than twice as likely as their black counterparts (29% v 13%) to be married to someone of equal or greater educational status.”

The report presents a complex social issue for our society with serious implications for the black population both women and men.