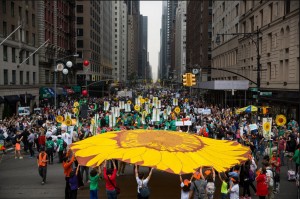 Yesterday, Manhattan was one of the centers for a number of demonstrations around the world calling for government leaders to start taking serious steps to save Earth. Legions of demonstrators frustrated by international inaction on global warming descended on New York City on Sunday, marching through the heart of Manhattan with a message of alarm for world leaders set to gather this week at the United Nations for a summit meeting on climate change. As described in the New York Times:

“Coursing through Midtown, from Columbus Circle to Times Square and the Far West Side, the People’s Climate March was a spectacle even for a city known for doing things big, and it was joined, in solidarity, by demonstrations on Sunday across the globe, from Paris to Papua New Guinea.

“I’m here because I really feel that every major social movement in this country has come when people get together,” said Carol Sutton of Norwalk, Conn., the president of a teachers’ union. “It begins in the streets.”

From the scientists holding an oversize chalkboard to the Hurricane Sandy victims toting life preservers, the march was a self-consciously inclusive affair, with the organizers intent on creating a very big tent, which they hoped would hammer home the relevance of climate change and its effects…

The climax of the march came in the early afternoon. All along the route, crowds had been quieted for a moment of silence. On Avenue of the Americas at 57th Street, there was an eerie silence as marchers raised their arms and looked down.

Then at exactly 1 p.m., a whistle pierced the silence, setting off a minute-long cacophony intended as a collective alarm on climate change. There were the beats of the drums and the blaring of horns, but mostly it was whoops and cries of the marchers.

One of the key organizers of the event, the international advocacy group Avaaz, presented a petition with more than 2.1 million signatures demanding action on climate change. “It’s a testament to how powerful this movement is,” Ricken Patel, executive director of Avaaz, said. “People are coming in amazing numbers.”

Like the march, the summit meeting on Tuesday at the United Nations will be flush with speeches intended to build support for addressing climate change. But the gathering of world leaders is not meant to be a formal negotiating session for a potential 2015 agreement.”