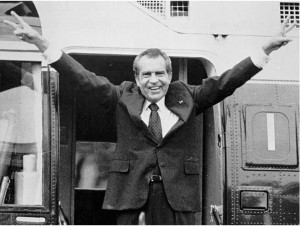 On August 8, 1974, Richard Milhous Nixon sat at his desk in the Oval Office and announced that he was resigning the office of the president. The next day, August 9th, he submitted his letter of resignation to Henry Kissinger and a nation changed.   As described The Atlantic:

“In his immediate wake, Nixon left a shattered and confused nation, a host of spurned aides, and an accidental president. The fallout from Watergate stripped the nation of its political innocence, revolutionized executive power, and bequeathed a range of new reforms. It sent a huge new crop of politicians to Washington. It marked the American vocabulary, producing a range of new expressions and one durable naming scheme for scandals. We’re still grappling with the scandal today: In every debate about executive power or campaign-finance law or White House press management, Nixon looms in the background, glowering under his perpetually furrowed brow…

For those who lived through it, Watergate remains a nightmare, more or less vividly remembered—the details gets fuzzy, the exact sequence is obscure, but the fear is just as real…For those who are younger, the saga seems hard to grasp, a little slapstick, a little scary, hardly believable.”