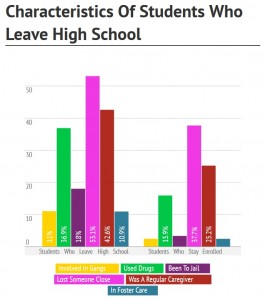 Earlier this year, Secretary of Education Arne Duncan proudly proclaimed that 80 percent of young people were graduating high school, the highest percentage in American history.   A new report out this week from America’s Promise Alliance sought to discover what happened to the remaining 20 percent.

America’s Promise Alliance, a nonprofit created by former Secretary of State Colin Powell, found that students who fail to finish high school generally face a range of challenges. After interviewing more than 200 Americans who left high school and analyzing more than 3,000 survey responses, researchers found that these students often grew up in “toxic environments,” where they experienced traumatic events like violence in the home or at school. For example, 30 percent of the survey’s respondents reported having been abused, 22 percent reported having been homeless and 18 percent reported having spent time in juvenile detention.

The report, titled “Don’t Call Them Dropouts,” noted that the term “dropout” rarely encapsulated the experience felt by many of the students they interviewed. Many of the interviewed students who left high school eventually re-enrolled and passed a GED high school equivalency exam.