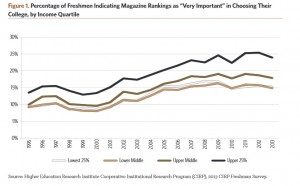 The American Council on Education published a report indicating that prospective students largely ignore college rankings  in magazines such as US News and World Report. The ACE report is directly largely at the proposed federal ratings system that would grade colleges and universities on measures like access, affordability and student outcomes. As reported in The Huffington Post:

“Twenty-four percent of college freshmen from wealthy backgrounds said that rankings were a “very important” factor in deciding where to go to school, the highest proportion among any demographic, according to data from the 2013 Higher Education Research Institute Cooperative Institutional Research Program cited in the report. Among low- and middle-income students, the proportion of those who said college rankings were “very important” was only about 10 percent…

Secretary of Education Arne Duncan insists that the proposed federal rating system would be significantly different from existing college rankings, such as those issued by U.S. News & World Report. But college leaders have been mostly critical of the Obama administration’s proposal.”

ACE and the college leaders are right on this issue!  In my 45 years of higher education administration and as a faculty member, I have never met a student who ever referred to a college ranking system.