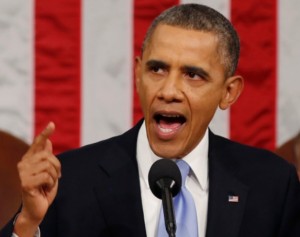 President Obama gave his state of the union address last night before the U.S. Congress.  His presentation was emotionally inspiring but there were few new proposals or ideas for moving the country forward.  It was a lot of what has been accomplished and little of what lies ahead other than he is willing to exercise more executive privileges to get something (maybe anything) done in Washington, D.C.

For those of us interested in education, he rehashed many of the policies (i.e., Race to the Top, early childhood education, community colleges, training for technology jobs, college affordability) that he has been promoting since he was elected.

The moment that generated the most response from his congressional audience was when he introduced Cory Remsburg, an Army Ranger, who suffered near fatal-wounds by a roadside bomb in Afghanistan.  As described by the President:

“…on his tenth deployment, Cory was nearly killed by a massive roadside bomb in Afghanistan. His comrades found him in a canal, face down, underwater, shrapnel in his brain.

For months, he lay in a coma. The next time I met him, in the hospital, he couldn’t speak; he could barely move. Over the years, he’s endured dozens of surgeries and procedures, and hours of grueling rehab every day.

Even now, Cory is still blind in one eye. He still struggles on his left side. But slowly, steadily, with the support of caregivers like his dad Craig, and the community around him, Cory has grown stronger. Day by day, he’s learned to speak again and stand again and walk again – and he’s working toward the day when he can serve his country again.

“My recovery has not been easy,” he says. “Nothing in life that’s worth anything is easy.”

The audience gave Cory a standing ovation and tears could be seen in the eyes of a number of our representatives. 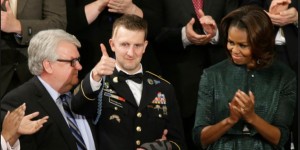