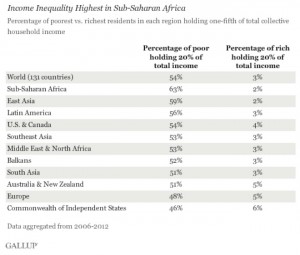 According to a recent Gallup Poll, across 131 countries worldwide, the richest 3% of residents hold 20% of the total collective household income — as do the poorest 54%. In other words, the 3% reporting the highest household incomes share the same “slice” of collective income across countries that more than half of residents worldwide — those on the lower end of the income scale — share.  A commentary in The Huffington Post noted:

“With the money they made in 2013 alone, the world’s richest people could have paid to feed the world’s hungry school kids 163 times over. In other words, they probably wouldn’t have even noticed the cost.

…Approximately $3.2 billion per year is all it would take to feed the 66 million kids in the world who go to school hungry, according to a 2012 estimate from theWorld Food Programme.

As of December 31, the world’s richest individuals were worth $3.7 trillion combined…. That’s just a bit more than Germany’s GDP, which stood at $3.4 trillion in 2012.

All in all, it was a pretty great year for billionaires, at least in part due to the stock market’s record gains. Not much of these gains were felt by the average American. Hourly wages for most Americans aren’t growing much faster than the rate of inflation, according to data from the Bureau of Labor Statistics.

And while we talk a lot about wealth inequality in America, it’s actually worse in some places across the globe.  Inequality is worst in Sub-Saharan Africa, but it’s not that much better in the U.S.”  See the table above for a list of countries.