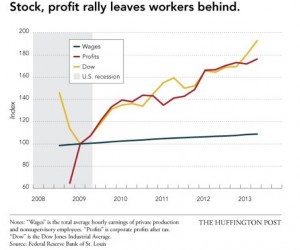 With the victory of Bill de Blasio in the New York City Democratic Primary on Tuesday, his theme of “ a tale of two cities” one rich and one struggling, has analysts examining his message. New York Times columnist, Charles Blow, commented:

The most progressive Democratic candidate, Bill de Blasio, who had in effect run as the anti-Bloomberg, was the clear leader in the Democratic primary.

And, for the most part, the city’s citizens seem to have eschewed identity politics in favor of class politics.”

“There are also national signs of unease. According to a Pew Research Center poll released Thursday, fewer than 8 percent of respondents thought that, after the recent recession, government policies have helped the poor, the middle class or small business a great deal. About five times as many believe they’ve helped the wealthy, large banks and other financial institutions, and large corporations.

And as the stock market soars for those with enough money to be in it, a Gallup poll released Thursday found that one in five Americans say they have struggled to afford food in the last year and that access to basic needs is near a record low.

According to the Bureau of Labor Statistics, the job market is dire, despite what the unemployment rate says.”

The graphic at the top of this posting compiled by The Huffington Post, compares several economic indices reflecting wages, profits and the Dow Jones Industrial Average.   It illustrates that wages have been stagnant since the recovery while the other two have soared.

The push-back to de Blasio has been that he is appealing to class differences to win over voters.  Well maybe he has struck the right chord with voters who are struggling economically in New York and other parts of the country.