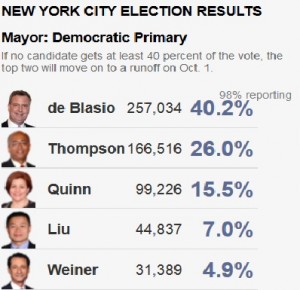 Bill de Blasio won yesterday’s Democratic Party primary for mayor.  With 98% of the precincts reporting,  de Blasio had 40.2% of the vote over Bill Thompson who had 26.0% and Christine Quinn  who had 15.5%.  A candidate had to have over 40% of the vote to avoid a run-off election.  Because there are still paper ballots to be counted, it has not been concluded if there will be a run-off.  If there is, it will be between de Blasio and Thompson.

Christine Quinn’s showing was perhaps the most interesting news of the primaries.  She had led in the polls for much of the campaign season, was endorsed by the three major newspapers in New York City and spent the most amount of money of any of the candidates.  However, her Faustian bargain with Michael Bloomberg to extend term limits, may have doomed her candidacy as it became evident that Democratic voters wanted a clean and complete break from the current mayor’s policies.

See the New York Times for further coverage of the election results.