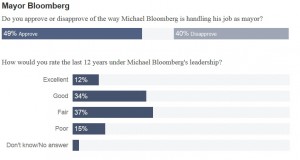 The latest New York Times poll asked New Yorkers to take a look back at Michael R. Bloomberg’s twelve years as mayor of New York City.  The message from the respondents is at best mixed.  As summarized in the New York Times:

In a stinging assessment of the mayor’s priorities and effectiveness, however, two-thirds of New Yorkers say they believe that the quality of the city’s long-troubled school system has stayed the same or become worse since he took office in 2002, despite his vigorous pledges to improve it.

Most New Yorkers say Mr. Bloomberg’s policies have favored the rich over the middle class and the poor. And 70 percent say that as mayor, he has paid too much attention to Manhattan, rather than its surrounding, less well-off boroughs.

Over all, the Times poll offers a portrait of a long-term relationship between mayor and city that remains deeply conflicted and contradictory, marked by almost loveless admiration and an unmistakable yearning for change as Mr. Bloomberg’s third and final term winds to a close.”

On the subject that is important to many readers of this blog – public education:

“There is strong opposition to the mayor’s dismantling of the city’s Board of Education in 2002. Fifty-seven percent now disapprove — a sign of dissatisfaction with the mayor’s handling of education since the State Legislature granted him much greater authority over the system.

The poll shows a profound sense of unease over the state of the public schools, whose reinvention Mr. Bloomberg had put at the center of his mayoralty and his legacy. He has raised teacher pay, closed failing schools, rolled out a letter-grade system for evaluating schools and made it harder for instructors to gain tenure.

Yet of those surveyed, 32 percent say public education has not changed during Mr. Bloomberg’s three terms; the same percentage say it has grown worse; and 26 percent say it has improved.

Phyllis Rudnick, a 77-year-old former teacher who lives in the Far Rockaway section of Queens, recalled the difficulty of watching families learn that their local schools would be shut down.

“Parents were so unhappy. They fight so hard to keep schools open,” Ms. Rudnick said. “After 12 years of being mayor, the best thing you can do is shut down a school and start over?”

It is my opinion that his greatest failing in public education was his choice of Joel Klein as chancellor.  Mr. Klein had no experience and took an adversarial position with teachers and parents alike.  The current chancellor, Dennis Walcott, has done a better job but came to the system too late in Mayor Bloomberg’s tenure.