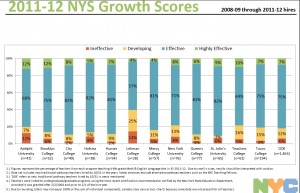 The NYC Department of Education released its first report on the teacher education programs that serve its public schools.  In a press release, Mayor Michael Bloomberg presented scorecards yesterday for twelve teacher-preparation programs in the city.   The report provides data on six measures:

While scores were mostly positive for the twelve programs, New York City officials cautioned against drawing sweeping conclusions from the data, saying the numbers were meant to provoke conversation, not rivalry. They noted that in some cases, the sample sizes were small; that test scores were available only in certain grades, in math and English; and that the data reflected only information from the past four years.

As reported in the New York Times:

“The release of the scorecards places the city at the forefront of a national effort, backed by the Obama administration, to use data to upend the teaching profession and the pathways to it. Critics have said subpar teaching programs too often hamper school systems, churning out graduates familiar with theory but lacking in practical classroom skills. A study by the National Council on Teacher Quality released in June argued that teaching colleges were too lenient in their admissions criteria and had not adequately prepared teachers in subjects like reading, math and science.”

However, the data in these scorecards suggest that for the most part, these teacher education programs are doing an above average job of teacher preparation.