The “Fast for Safe Schools” protest in Philadelphia is entering its third week.  The hunger strike, which is in protest of the layoffs of more than 1,200 Philadelphia school safety workers, takes place amid budget negotiations at the Pennsylvania state legislature that protestors hope will restore funding for the laid off workers.  A group of two parents and two school food service workers began the fast on June 17. On Monday, another group of concerned locals, parents and school employees stepped in to continue the fast after the original protestors bowed out for health reasons.   The layoffs come after the city’s school reform commission voted to close 23 schools earlier this month. In addition to the school safety workers, about 2,500 district teachers and school employees are also being laid off.

On Thursday, 15 politicians pledged to fast for 24 hours, an organizer of the fast, Kyle Schafer, told The Huffington Post.

Among the fasting politicians are three council people, six state representatives, four state senators, a district attorney and a United States congressman. According to a press release, the politicians believe the layoffs will lead to higher rates of violence in Philadelphia schools.

“I fully support this effort and I also need to shed some pounds,” Congressman Bob Brady said in a press release. “I am committed to help make sure that when our children go back to school in the fall their schools will be safe.”

“While my participation may be symbolic, the cause for which we are all standing is very real,” said state Sen. Anthony Hardy Williams in a statement. “Without adequate funding, the consequences of inaction stand to be devastating to our schools. Safety is the one area where no one should be willing to compromise when it comes to our kids.”

We wish these protesters well! 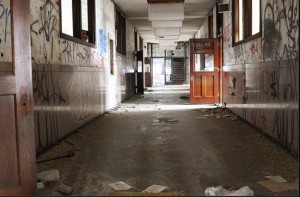 A closed school in Philadelphia.