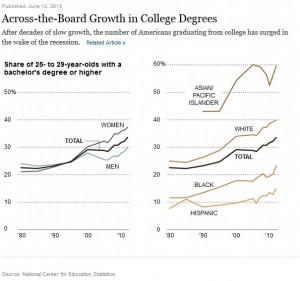 The number of Americans graduating from college has surged in recent years, sending the share with a college degree to a new high, federal data show.  The surge follows more than two decades of slow growth in college completion, which caused the United States to fall behind other countries and led politicians from both parties, including President Obama, to raise alarms.   Last year, 33.5 percent of Americans ages 25 to 29 had at least a bachelor’s degree, compared with 24.7 percent in 1995, according to the National Center for Education Statistics. In 1975, the share was 21.9 percent. The number of two-year college degrees, master’s degrees and doctorates has also risen recently.  As reported in the New York Times:

“The increases appear to be driven both by a sharp rise in college enrollment and by an improvement among colleges in graduating students. The trends could bring good news in future years, economists say, as more Americans become qualified for higher-paying jobs as the economy recovers.

College attendance has increased in the past decade partly because of the new types of jobs that have been created in the digital age, which have increased the wage gap between degree holders and everyone else. The recent recession, which pushed more workers of all ages to take shelter on college campuses while the job market was poor, has also played a role.

“Basically, I was just barely getting by, and I didn’t like my job, and I wanted to do something that wasn’t living dollar to dollar,” said Sarah O’Doherty, 24, a former nail salon receptionist who will graduate next month from the County College of Morris in New Jersey with a degree in respiratory therapy. “After I had my son, I wanted to do something I felt passionate about, to have a career.”

The attainment of bachelor’s degrees has risen much faster for young women in the past decade than for young men. It has also risen among young whites, blacks and Hispanics, though relatively little among Asians, who already had the highest rate of college completion. The share of people with a college degree also varies tremendously by state, with 48.1 percent of people ages 25 to 34 in Massachusetts holding a bachelor’s degree, but just 20.4 percent in Nevada, according to the National Center for Higher Education Management Systems, a research and development center founded to improve management at colleges.”

This is indeed good news.   Congratulations to American higher education!