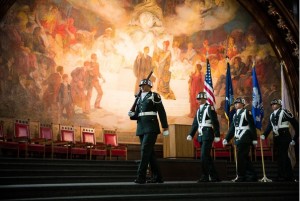 “The Great Hall of City College, a carved stone and stained glass chamber so collegiate Gothic it could be mistaken for one in Cambridge, Mass., or Cambridge, England, is crowned by a mural that enshrines scholarship as an Olympian endeavor.

But at a ceremony on Tuesday, the hall was filled not with graduates in cap and gown but by Army officers in dress uniform. They were there to signal the return of the Reserve Officers Training Corps, a program that has not operated at City College for some four decades, and which was ended when students there led a successful drive to evict it.

The most important military figure in the room, and certainly the most famous alumnus of City College’s R.O.T.C. program, was in civilian attire. Colin L. Powell, the retired general and former chairman of the Joint Chiefs of Staff in whose honor the college’s division of social sciences was recently renamed, was on hand to offer his benediction and to serve as inspiration.

Speaking from a podium where a color guard had solemnly planted a row of flags, the chancellor of the City University of New York, Matthew Goldstein, said, “The leadership program offered by Army R.O.T.C. is a perfect complement to CUNY’s own educational mission of access, excellence and service, and reinforces the very ideals of our democracy.”

Then, in a scene reminiscent of an armistice ceremony, he, Maj. Gen. Jefforey A. Smith and Dr. Lisa Staiano-Coico, the college’s president, sat at a table and passed documents back and forth, signing them with ceremonial pens as 14 cadets stood behind them in formation.

R.O.T.C. first arrived at City College, which is part of CUNY, in 1919, as a compulsory two-year program. The students of City College, who at the time were all men, did not take well to it. According to S. Willis Rudy’s history of the college, in 1925 students voted 2,092 to 342 to oppose the program. Eight years later, when the college’s president suspended classes so that everyone could attend R.O.T.C.’s military drills, 400 students protested, and 21 were eventually expelled.

In the 1950s, according to Mr. Powell’s book, “My American Journey,” City College’s R.O.T.C. program was the largest in the United States. But by 1971, with anger mounting over the Vietnam War, it had attracted so many student protests that the Faculty Senate voted to abolish the program, as did many other colleges during the same period.

R.O.T.C. cadets participate in drills and other practical exercises and take 24 credits of elective study in courses emphasizing leadership skills and military history, all as a path toward service as an officer in the Army. Those who commit to military service are eligible for scholarships and stipends. Dr. Staiano-Coico said she first heard the idea to reinstate R.O.T.C. from veterans she encountered on campus while interviewing for the college’s presidency…

CCNY’s Faculty Senate voted by a wide majority to allow R.O.T.C. back. But three professors stood outside the ceremony holding antiwar placards, protesting what they see as the remilitarization of their school.

“Bringing back R.O.T.C. cheapens our curriculum,” said one of them, Bill Crain, a psychology professor.

Mr. Powell, a former secretary of state, passed the protesters on his way into the hall. “Don’t agree,” he said, “but you’re entitled.”