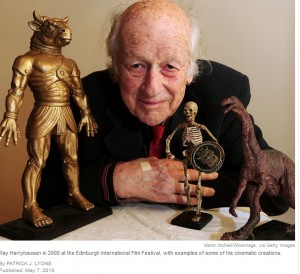 Ray Harryhausen, a cinema special effects genius died yesterday at the age of 92.  As a child growing up in the 1950s and 1960s, his movies were “must see” entertainment for my generation. At the time time I no idea  who he was but as a long-time devotee of Turner Classic Movies  (TCM) I came to learn of Mr. Harryhausen as the man behind many of the great movies of my childhood.  In his obituary, the New York Times mentions:

“Often working alone or with a small crew, Mr. Harryhausen created and photographed many of the most memorable fantasy-adventure sequences in movie history: the atomically awakened dinosaur that lays waste to Coney Island in “The Beast From 20,000 Fathoms”; the sword fight between Greek heroes and skeleton warriors in “Jason and the Argonauts”; the swooping pterodactyl that carries off Raquel Welch in “One Million Years B.C.”

Though his on-screen credit was often simply “technical effects” or “special visual effects,” Mr. Harryhausen usually played a principal creative role in the films featuring his work. He frequently proposed the initial concept, scouted the locations and shaped the story, script, art direction and design around his ideas for fresh ways to amaze an audience.

Mr. Harryhausen made use of many different photographic effects and often combined several in the same film. But he was best known for stop-motion animation, a painstaking process using three-dimensional miniature models that are photographed one frame at a time, with tiny, progressive adjustments made by hand to the models between frames to produce the illusion of movement….

The effects he achieved inspired the generation of filmmakers who produced the digital-effects-laden blockbuster films of the 1980s and beyond.

George Lucas and Steven Spielberg, James Cameron and Peter Jackson all cite his films as crucial antecedents for their work, and modern animators often slip homages to him into their films.”

His innovations were honored in 1992 with a career Academy Award for technical achievement. At the Oscar ceremony, Tom Hanks told the audience that he thought the greatest movie of all time was not “Citizen Kane” or “Casablanca” but Harryhausen’s “Jason and the Argonauts.”

Thank you Mr. Harryhausen for the hours of great entertainment you gave us!