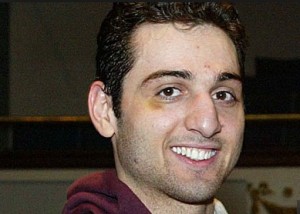 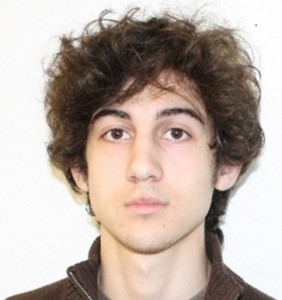 Yesterday was a day that sent the news media in a frenzy as reporters tried to keep up with the latest developments in the confrontations  between police and suspects in the Boston Marathon bombings.    It was reminiscent of the O.J. Simpson chase in the 1990s with viewers glued to their television sets awaiting the outcome of the hunt for two brothers, Tamerlan and Dzhokhar Tsarnaev, the prime suspects in the bombings.  At the end of the day, the older brother Tamerlan (left photo above), aged 26,  was killed , and the young brother,  Dzhokhar (right photo above), age 19, was wounded and brought into custody.  Much will be written about these two young men in the coming months especially about their motives.  If there are profiles of people who commit heinous acts of destruction,  it will be debated whether these two fit any of them.

The New York Times describes them:

“One was a boxer, one a wrestler. One favored alligator shoes and fancy shirts, the other wore jeans, button-ups and T-shirts.

The younger one — the one their father described as “like an angel” — gathered around him a group of friends so loyal that more than one said they would testify for him, if it came to that.

The older one, who friends and family members said exerted a strong influence on his younger sibling — “He could manipulate him,” an uncle said — once told a photographer, “I don’t have a single American friend. I don’t understand them.”

A kaleidoscope of images, adjectives and anecdotes tumbled forth on Friday to describe Tamerlan Tsarnaev, 26, and Dzhokhar Tsarnaev, 19, the two brothers suspected of carrying out the bombings at the Boston Marathon that killed three people and gravely wounded scores more.

What no one who knew them could say was why the young men, immigrants of Chechnyan heritage, would set off bombs among innocent people. The Tsarnaevs came with their family to the United States almost a decade ago from Kyrgyzstan, after living briefly in the Dagestan region of Russia. Tamerlan, who was killed early Friday morning in a shootout with law enforcement officers, was 15 at the time. Dzhokhar, who was in custody Friday evening, was only 8.

In America, they took up lives familiar to every new immigrant, gradually adapting to a new culture, a new language, new schools and new friends.

Dzhokhar, a handsome teenager with a wry yearbook smile, was liked and respected by his classmates at Cambridge Rindge and Latin School, where celebrities like Ben Affleck and Matt Damon had walked the halls before him. A classmate remembered how elated he seemed on the night of the senior prom. Wearing a black tuxedo and a red bow tie, he was with a date among 40 students who met at a private home before the event to have their photos taken, recalled Sierra Schwartz, 20.

“He was happy to be there, and people were happy he was there,” Ms. Schwartz said. “He was accepted and very well liked.”

A talented wrestler, he was listed as a Greater Boston League Winter All-Star. “He was a smart kid,” said Peter Payack, 63, assistant wrestling coach at the school. In 2011, the year he graduated, was awarded a $2,500 scholarship by the City of Cambridge, an honor granted only 35 to 40 students a year.

A promising boxer, he fought in the Golden Gloves National Tournament in 2009, and he was noticed by a young photographer, Johannes Hirn, who took him as a subject for an essay assignment in a photojournalism class at Boston University. “There are no values anymore,” Tamerlan said in the essay, which was later published in Boston University’s magazine The Comment. “People can’t control themselves.”

We will see in the coming months what drove these two to kill and maim innocents.