A painting entitled The Truth  by  Michael D’Antuono features President Obama with a crown of thorns on his head, in a position that is reminiscent of the crucifixion. Currently on display at Boston’s Bunker Hill Community College Art Gallery as part of D’Antuono’s politically charged “Artists on the Stump – the Road to the White House 2012″ collection, the piece was actually supposed to debut several years ago here in New York City’s Union Square.  Because of opposition from religious groups especially the Christian Right, D’Antuono cancelled its showing then.

Another painting (see below) entitled Who the Hell is Grover Norquist, by D’Antuono at the exhibiton in Boston, depicts Grover Norquist as a mean-spirited Wizard of Oz with Washington Republican politicians kneeling before him. 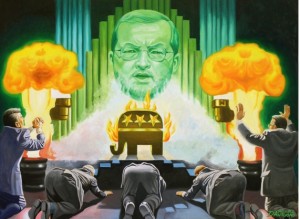