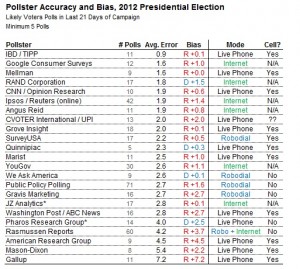 During the final few weeks of the recent presidential election, it seemed like everyday, there was a poll conducted by some organization showing the preferences of likely voters.  If you were someone who watched or read different news reports, it was difficult to figure out in which poll to believe since in many cases they were not consistent.  Nate Silver, a most respected statistician and author of the best-seller, The Signal and the Noise, on his blog, has done an analysis of the election polling and has ranked all of the major polling organizations for the 2018 election.   The rankings are above but in a nutshell:  IBD/TIPP, Google Consumer Surveys, and Mellman were the most accurate while Gallup, Mason-Dixon and American Research Group were the least accurate.    As can be seen in the rankings, there is a a good deal of disparity among the pollsters.

“it turned out that most polling firms underestimated Mr. Obama’s performance, so those that had what had seemed to be Democratic-leaning results were often closest to the final outcome.

Conversely, polls that were Republican-leaning relative to the consensus did especially poorly.”