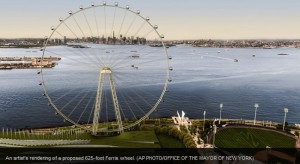 New York will build a new Ferris wheel on Staten Island joining a number of other major cities such as London and Singapore that have such attractions.   The New York Wheel will be the tallest  Ferris wheel  on the planet at 625-feet and cost $230 million. It will  grace a spot on Staten Island overlooking the Statue of Liberty and the downtown Manhattan skyline. Designed to carry 1,440 passengers at a time, it’s expected to draw 4.5 million people a year to a setting that also would include a 100-shop outlet mall and a 200-room hotel.  As a comparison, the Wonder Wheel in Coney Island in Brooklyn is 150 feet tall.

The attraction stands to change the profile of the least populous and most remote of the city’s five boroughs, a sometime municipal underdog that has taken insults from New Jersey and was once known for having the world’s largest landfill.

“It’s going to be a real icon. The Ferris wheel will be Staten Island’s Eiffel Tower,” Sen. Charles Schumer enthused.

As a visible addition to the skyline around the harbor, the wheel “gives Staten Island an identity beyond its role as a suburban community,” while letting it tap into the stream of tourist money in a city that drew 50.9 million visitors last year, said Mitchell Moss, a New York University urban policy professor.