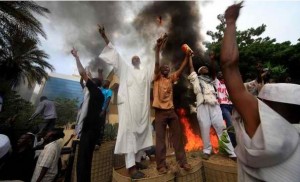 The New York Times is reporting on the protests that erupted in 20 Islamic nations yesterday in Africa, the Middle East and in East Asia.  The Anti-American protests  that began this week over a video insult to Islam were violent and in several instances deadly.

“The broadening of the protests appeared to reflect a pent-up resentment of Western powers in general, and defied pleas for restraint from world leaders, including the new Islamist president of Egypt, Mohamed Morsi, whose country was the instigator of the demonstrations that erupted three days earlier on the anniversary of the Sept. 11, 2001, attacks.

The anger stretched from North Africa to South Asia and Indonesia and in some cases was surprisingly destructive. In Tunis, an American-run school that was untouched during the revolution nearly two years ago was completely ransacked. In eastern Afghanistan, protesters burned an effigy of President Obama, who had made an outreach to Muslims a thematic pillar of his first year in office.

The State Department confirmed that protesters had penetrated the perimeters of the American Embassies in the Tunisian and Sudanese capitals, and said that 65 embassies or consulates around the world had issued emergency messages about threats of violence, and that those facilities in Islamic countries were curtailing diplomatic activity. The Pentagon said it sent Marines to protect embassies in Yemen and Sudan.

The wave of unrest not only increased concern in the West but raised new questions about political instability in Egypt, Tunisia and other Middle East countries where newfound freedoms, once suppressed by autocratic leaders, have given way to an absence of authority. The protests also seemed to highlight the unintended consequences of America’s support of movements to overthrow those autocrats, which have empowered Islamist groups that remain implacably hostile to the West.

“We have, throughout the Arab world, a young, unemployed, alienated and radicalized group of people, mainly men, who have found a vehicle to express themselves,” Rob Malley, the Middle East-North African program director for the International Crisis Group, a consulting firm, said in a telephone interview from Tripoli, Libya.”